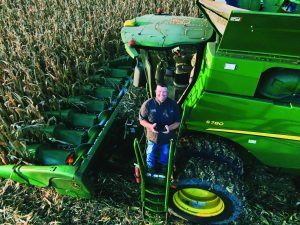 Tired of high food costs? We have info on how and where to complain, courtesy USDA. Also this week: A preview of Illinois’ first official Soil Health Week, and results of the National Corn Growers Association’s annual photo contest, won by an Illinois farmer. Please read on …

WASHINGTON, D.C. — So you say you are tired of the artificially inflated prices you’re paying for meat and poultry at your local supermarket. So are America’s farmers and ranchers, who are seeing their share of the food dollar dwindle as anti-competitive U.S. meat processing facilities — of which there are but a select few — conspire to drive prices higher. The USDA, under the direction of Secretary Tom Vilsack, is fighting back with the announcement of a new hotline for farmers, ranchers, and the public to report violations of livestock and poultry antitrust laws, including the Packers and Stockyards Act.

With the blessing and encouragement of the Biden administration, Vilsack recently expressed concern that producers across the country have for too long faced a marketplace that benefits a few large companies over the farmers and ranchers who grow and raise food. Vilsack noted that ranchers received more than 60 cents of every dollar a consumer spent on beef 50 years ago, compared to approximately 39 cents today. Hog farmers fared worse over the past 50 years, as their share of the consumer dollar fell from between 40 cents to 60 cents 50 years ago to approximately 19 cents today, according to the USDA secretary.

According to a Feb. 9 USDA news release, consumer complaints and tips will go through a preliminary review by USDA Packers and Stockyards Division staff and Department of Justice staff. If a complaint raises sufficient concern under the Packers and Stockyards Act or antitrust laws, it will be selected for further investigation by the appropriate agency. This action may lead to the opening of a formal investigation. USDA or DOJ staff will only contact complainants if additional information is needed, and all complaints will remain anonymous.

The complaint portal may be accessed via www.farmerfairness.gov.

SPRINGFIELD — More pressure can be put on the national meatpacking industry to lower prices by increasing the number of small, local meat processors — and the red tape that comes with doing business. This is according to Dr. John O’Keefe, head of the Illinois Department of Agriculture meat and poultry inspection bureau, who said the pandemic pointed out the impact large national processors have on the meat industry.

“Apparently, the public has started to see the benefit of buying locally grown and processed meat products. Building more small slaughter-processing plants will be key to keep that option open for farmers and customers,” said O’Keefe, adding that the state’s ability to inspect meat processing facilities in a timely and efficient manner is not contributing to the national meat and poultry pricing issue. Nor, he added, would the state’s current shortage of inspectors inhibit local expansion of meat processing capacity.

“State inspection will not be a hindrance to the local effort. We are committed to making sure we have the inspection staff necessary for anyone who wants to start a facility. We will also offer them as much help as we can to assure they can meet all regulations and make a safe and wholesome product,” O’Keefe said. (Illinois Farm Bureau)

SPRINGFIELD — Illinois is set to observe its first dedicated Soil Health Week (March 7-11) and Soil Health Day (March 9), due to a farmer-led effort and legislation put forth by state Sen. Scott Bennett and State Representative Charlie Meier. The celebration will bring together farmers and eaters, organizations, state leaders, legislators and individuals with a variety of lunch-and-learn opportunities and resources. Each day of the week features different voices in the food and farm system presenting on a range of topics that focus on how important the soil profile is to Illinois, according to Liz Rupel, lead organizer for the Illinois Stewardship Alliance.

A leading voice behind the legislation was Richard Lyons, who farms in Harvel, Illinois. Lyons added: “Only 90 years ago, U.S. agriculture went through its most trying times in its existence with a combination of the Great Depression and the Dust Bowl of the Great Plains. Through greater knowledge, innovation, and technology, Illinois farmers have moved toward a greater understanding of the soil biome. This resilience has increased our productivity, rejuvenated our soil and is helping us improve our water quality. Why should we not celebrate?”

Virtual, free and open to the public, more information and registration for Soil Health Week events can be accessed at www.ilstewards.org/soil-health-week.

BLOOMINGTON — An Illinois farmer has won the National Corn Growers Association annual photo contest. “Every farmer loves driving the tractor and combine, but may also admit that after several long days it’s nice to have a distraction. My favorite distraction over the last several years has been farm photography,” said Todd Wachtel, a fifth-generation farmer from Altamont where he, his father and uncle grow corn and soy.

“I used to carry a DSLR camera with me in the cab until I decided that these newer generation cell phones have amazing cameras and I really don’t need the big, clunky camera with me. With so many people becoming farther removed from the farm, I’ve enjoyed using social media to share farming photos to keep people up to date with what’s going on. I’ve entered the contest the last three years and won a couple of first-place prizes. Winning the Grand Prize was very exciting this year,” Wachtel added.

The Peoria County Farm Bureau will host a “Food, Feed and Fuels” seminar the morning of Feb. 17 at the PCFB auditorium. Call 309-686-7070 for more information.