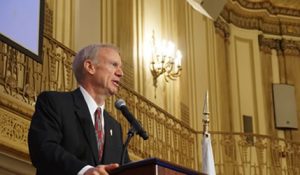 The state’s “grand bargain” budget process may have been more harmed than helped by Gov. Bruce Rauner’s budget address to the General Assembly Feb. 15.

The governor’s speech was part call to action and part pep talk.

“We must act and time is of the essence,” Rauner said, urging lawmakers to work together to approve a 570-page budget proposal that was not released until after the speech.

In exchange, Rauner urged lawmakers to adopt a property-tax freeze, which could be reconsidered in the future, he said. He also said “job-creators” wanted workers’ compensation reforms, term limits and redistricting reforms — all part of the governor’s “Turnaround Agenda”— which has not seen a single reform enacted so far.

“This isn’t about pointin’ fingers or assignin’ blame,” Rauner said, adopting his folksy “g-dropping” mannerism and inspiring laughter among the lawmakers. “We are where we are. It’s not about the past; it’s about how we move forward together.”

In basic terms, the state has $32.7 billion of revenue coming in. However, expenses are on-track to rise by $1.6 billion in FY 2018 to $39.7 billion. The governor’s plan proposes a $240 million sale of the Thompson Center in Chicago.

About $1 billion of the new expenses are predicted from pension spending. Rauner begged lawmakers not to kick pension reform down the road.

“Today, over 60 percent of the state’s general revenues — roughly $20 billion — are locked up by statute,” Rauner said. “No governor can effectively reduce spending until we address automatic spending categories like pensions, Medicaid and transfers out.”

Rauner’s speech mentioned an optional proposed “Tier III” pension program, similar to a private 401(k) plan. The Illinois pension obligation is $126.5 billion. The state must come up with $8.8 billion in pension payments for FY 2018.

The budget unveiled by Rauner’s team proposed getting rid of pensions for highly paid state workers with annual salaries more than $180,000. Tweaks in the state funding formula could save $750 million, the budget claims. Cutting health insurance benefits to retired teachers and persons in the SURS university retirement system are also in the mix. Re-negotiating benefits for existing employee health insurance could save $500 million.

Rauner mentioned a boost to Illinois education, particularly the transportation funds, which have been underpaid by the state for years. The proposed plan increases the state education funding by $213 million to $7.7 billion.

Next year $24.4 billion is projected to come from personal and corporate income taxes and sales tax. That amount is up almost 4 percent, or $863 million.

Rauner called for a freeze on property taxes, which he said could be lifted when the state had regained better fiscal footing. He also gave approval to proposed new taxes on services, which he said are common in neighboring states such as Wisconsin. Rauner said he did not approve taxing food or medicines. A soda tax was removed from the “grand bargain” bill batch last month.

The state’s bill backlog is around $12 billion and may grow to $14.7 billion by the end of fiscal 2017 on June 30, according to The Bond Buyer, an online investor trade publication.

“Illinois faces a drop to the lowest investment grade level without action by the end of the fiscal year, June 30,” the site said. The state holds less than $50 million in reserves, the site said.

Rauner’s speech implored cooperation to hammer out an agreement.

“Today, we are here once again with our hand outstretched to the leaders and members of the General Assembly. Between ongoing budget negotiations in the Senate and all of our leaders acknowledging the need for change, there is good reason for optimism,” he said. “Now is the time to take the next step and get the job done.”

Democrats in the House and Senate were less enthusiastic.

“‘Staying the course’, as the governor wishes, means billions of dollars in new debt, and lost services for tens of thousands of Illinois’ most vulnerable children, seniors and families,” said a statement from House Leader Michael Madigan. “Unlike the governor’s ‘stay the course’ plan, Democrats are proposing a new way forward. We want to work cooperatively with the governor to pass a full-year balanced budget and improve our economy, but we don’t accept that the only way to create jobs is by cutting wages and stripping away protections for workers in an effort to increase profits for businesses — all at the expense of middle-class families.”

The House has not yet considered the “grand bargain” bills now being fine-tuned in the Senate.

Judge Robert LeChien, in Belleville, upheld an earlier 2015 injunction saying state workers must be paid even if a budget is not in place. LeChien said he did not want to “create a game of chicken.”

A statement from the Attorney General’s office said the injunction violated the Illinois Constitution.

“We think the law is clear,” said Attorney General Spokeswoman Maura Possley. “The Illinois Constitution requires an enacted appropriation for state spending. Under the current injunction, the state has spent over $3 billion in taxpayer money without any transparency or legislative debate as required by law. The governor is using this injunction to avoid following the Constitution and enacting a budget, irreparably harming the people of Illinois.”

There are 63,000 government employees in the state of Illinois who make up a weekly payroll of $400 million. “The ultimate result [would be] the government shuts down and everybody loses,” said state employee union attorney Steve Yokich in a video interview. Rauner has accused Madigan of attempting to “shut down the government to force a crisis.”

“We’re pleased our hard-working state employees, who show up to work every day on behalf of the people of Illinois, will continue to be paid,” the state’s General Counsel Dennis Murashko said in a statement after LeChien’s ruling.

Madigan, daughter of House Leader Michael Madigan, said she would appeal the decision.