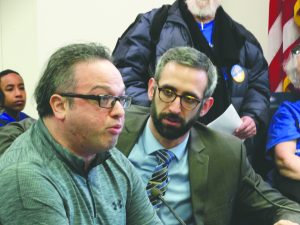 Chicago resident David Zoltan (left) and Rep. Will Guzzardi (D-Chicago) testify Wednesday before a House subcommittee in favor of a bill that would allow municipalities in Illinois to enact rent control laws. The bill, sponsored by Guzzardi, failed to advance out of the subcommittee. (Photo by Peter Hancock/Capitol News Illinois)

SPRINGFIELD — A bill that would give local governments authority to enact rent control laws stalled in a House subcommittee Wednesday, possibly killing the proposal for the 2019 session.

That action came at the end of a lengthy hearing in which affordable housing advocates argued that skyrocketing rents, particularly in the Chicago area, are driving many people on limited incomes out of their homes, sometimes onto the streets or into homeless shelters.

Chicago resident David Zoltan spoke about one of his neighbors named Ellen, who was recently evicted from an apartment where she had lived for 16 years because she could not afford her rent increase. He described Ellen as an arm and leg amputee whose only income is from Social Security, and after her eviction she was rendered homeless.

“Ellen’s story is not unique. We have a city full of Ellens,” Zoltan said. “The best way to prevent more cases like Ellen’s is to lift the ban on rent control. Let communities have a say.”

House Bill 255 would have repealed a 1997 state law known as the Rent Control Preemption Act that prohibits municipalities from enacting rent control laws.

Rep. Will Guzzardi, a Chicago Democrat who sponsored the bill, argued that he wasn’t asking for a vote for or against rent control, but rather simply to give local communities the option of enacting their own policies.

But several business groups representing real estate agents and developers, as well as labor unions and the Illinois Chamber of Commerce, opposed the measure, arguing that it was the wrong way to deal with affordable housing shortages in Illinois communities.

“The only way to solve the affordability issue is to increase supply of housing,” Michael Mini of the Chicagoland Apartment Association told the committee. “The overwhelming evidence suggests rent control actually reduces the quality and quantity of rental housing. Policy experts and economists almost unanimously oppose it as a means to address affordability.”

Among members of the subcommittee, opinions about the bill were sharply divided.

Rep. Daniel Didech, a Buffalo Grove Democrat and a supporter of the bill, accused opponents of the legislation of being “extremist” and asked whether they think it should be permissible for a landlord to raise someone’s rent by 100 percent in a single year, or even 1,000 percent.

“Theoretically, I can’t imagine what the situation would be, but my position is that property owners should be able to adjust their rents based upon their costs and the competition in the marketplace,” Mini said in response.

But Rep. Andrew Chesney, a Freeport Republican, argued that it would be dangerous to grant municipalities sweeping authority to impose rent controls without knowing first what kind of controls they would impose.

“The way I read this, a municipality could come in and say you can’t raise rents at all,” he said. “And this body doesn’t give any clarity to how anybody who has existing properties, or for somebody that’s investing, what the rules are, because they can be whatever the local body wants.”

Discussion of the bill came near the end of a four-hour committee meeting, and by the time the panel was done hearing testimony, the full House was already in session taking votes while some members of the committee still had questions.

Guzzardi, however, asked the panel to proceed with a vote. Only two members of the subcommittee voted to advance the bill while four members voted no.

“We believe today’s decision is a positive development for the millions who rent their homes in Illinois because market-rate housing will continue to function without interference,” Mini said in a statement after the vote. “It is true that affordable workforce housing, especially in Cook County, is currently lacking in supply, but the concept of rent control would make the goal of providing additional affordable housing less attainable because it would reduce the supply and quality of rental units to select from.”