This is another story in Chronicle Media’s ongoing series looking at how funds allocated to Illinois in the Volkswagen settlement may be used to create cleaner air for Illinois residents. 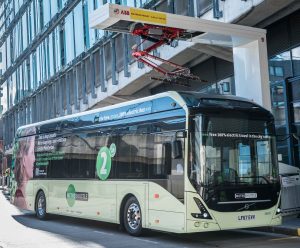 A zero-emission, fully electric bus in Manchester, England can recharge in three to six minutes. An Illinois environmental group’s report says if all the mass transit buses in the state were replaced with electric vehicles, it would be the equivalent of taking more than 20,000 cars off the roadways annually. (Photo courtesy of ABB)

Having all electric buses for mass transit in Illinois could have the same environmental impact as taking more than 20,000 cars off the road, according to a new environmental study.

As state leaders debate how to spend Volkswagen settlement funds, a report from the Illinois PIRG Education Fund and Frontier Group points to the public health benefits of leaving diesel buses at the curb.

The report, “Electric Buses: Clean Transportation for Healthier Neighborhoods and Cleaner Air,” shows that a full transition to electric buses in the state could avoid an average of 106,993 tons of climate-altering pollution each year — the equivalent of taking 20,655 cars off the road.

In Chicago alone, transitioning the Chicago Transit Authority’s flee of 1,653 diesel buses to all-electric vehicles would avoid an average of 54,993 tons of pollution each year, the equivalent of taking 10,616 cars off the road, the report stated. In January, the CTA announced plans to purchase 20-30 new all-electric buses.

“There’s no reason we should be running dirty, polluting buses in our communities when we have better, cleaner options,” said Abe Scarr, state director of the Education Fund for Illinois PIRG, a consumer group focused on health and safety, and financial security issues.” Our research shows that whether commuters are on the bus or boarding the bus, they’re exposed to toxic air in high concentrations, while simultaneously, diesel contributes to global warming. We have the technology to avoid this, so why wouldn’t we?”

The report identifies several ways Illinois can pay for the transition to electric buses, including the VW settlement, state and federal grants, and utility investment as part of the “Dieselgate” settlement.

Scarr and other PIRG officials say a portion of that settlement could be used to purchase all-electric buses and charging infrastructure.

Lawmakers and environmental organizations have criticized the IEPA for a lack of transparency and opportunities for public input as they drafted the plan to spend Illinois’ portion of the settlement money.

Three IEPA public outreach session were subsequently conducted in May, including one in Chicago, where Scarr spoke.

The draft IEPA plans calls for 65 percent of funds to be directed toward “off-road projects,” such as replacing locomotives, tugboats and other large air-pollution generators.

“The compelling data in this report reinforces the need for the Illinois Environmental Protection Agency to design a better Volkswagen settlement plan that allocates more … to electric school buses and mass transit,” said Susan Mudd, senior policy advocate at the Environmental Law & Policy Center. “Investing in electric mass transit and school buses will protect the health of our kids and those most affected by air pollution and move Illinois toward a clean transportation future.”

—- Report points to electric buses as best for long haul —-