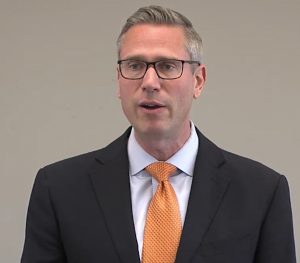 State Treasurer Michael Frerich talks about the Money Match program, which will be sending state checks to Illinois residents with unclaimed property. (BlueRoomStream.com)

The check may be in the mail — really.

Thousands of Illinois residents over the next several weeks will be getting the money from unclaimed checks in the mail via the state Treasurer’s Office.

The checks, totaling $12 million, going out to the 63,000 properties statewide is the initial distribution in state Treasurer Michael Frerich’s Money Match program. Individuals with unclaimed checks of less than $2,000 will be getting replacement checks sent to them at the address on file with the state’s Department of Revenue from their tax return.

“You currently search our database and file a claim,” Frerich said Sept. 4 in announcing the Money Match program. “In the past, you had to mail something in and get it notarized.”

Changes earlier this year made it easier for individuals to search online for unclaimed property and upload documents online, but the onus was always on the individual.

“You had to initiate a claim with our office,” Frerich said. “Because of legislation last year, we can cooperate with the Illinois Department of Revenue and match the lists of taxpayers and unclaimed property. If we know where they live, we are able to mail them a check.”

The treasurer noted this will be the first time that Illinois citizens will not have to fill out a form to obtain their unclaimed property.

Being able to track down individuals based on their tax returns means the state will send individuals checks for their unclaimed property, Frerich said.

Frerich said the effort to use tax return information to locate people with unclaimed property started about a year ago. Wisconsin and Rhode Island have similar systems already in place, according to Frerich. 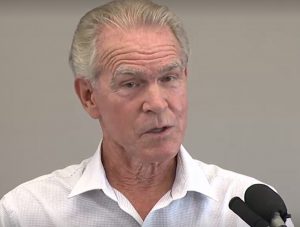 Carl Hill talks about the benefits of the treasurer’s unclaimed property programs. Hill said he and his wife recovered more than $550 through the program. (BlueRoomStream.com)

“We are ready to start mailing out checks,” the treasurer said, noting that the state is sitting on $2 billion in unclaimed property.

“It is my responsibility to return property no matter how long it takes,” Frerich said. “… I ask people to check their mail.”

Carl Hill of Champaign heard of the Treasurer’s Office database for unclaimed property and, on a whim, checked it out.

“For the heck of it, I did it and found I had 50-something dollars,” Hill said.

He had his wife check the database and she found that she had a $500 check unclaimed for a life insurance policy that her dad had taken out on her as a child.

Hill said the new program of mailing checks directly to people will make the process even easier.

“It’s for real,” he said of the program.

Frerich said he wants to help Illinois residents get money that they rightfully deserve.

“We want to show government does work,” the treasurer said. “We want to get money back in the economy and circulating.”

Frerich encouraged people to still check the Treasurer’s Office unclaimed property website, https://icash.illinoistreasurer.gov/app/claim-search, instead of just looking for a check in the mail. He noted that checks exceeding $2,000, stocks and bonds, items with shared custody and physical property left in safe deposit boxes will not be mailed to individuals and need to be claimed through the Treasurer’s Office.

Frerich reassured residents that if they get a check in the mail from his office, it is genuine.

“Cash that check. It’s legitimate,” Frerich said. “It does more good in your community than it does sitting in a bank account in Springfield.”

The treasurer did warn of potential scams occurring with word of state Treasurer’s Office checks hitting the mail. He said the Treasurer’s Office does not require the turning over of any personal information to get a check nor does it ever charge a fee of any kind for unclaimed property checks.

— Residents may cash in on unclaimed property —