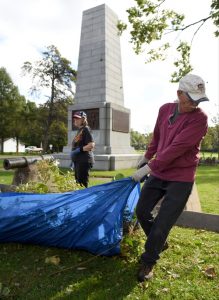 Volunteers Karin Ciaccio and David Keenan Miles work to clear brush from the river view of the Campbell’s Island monument on Wednesday, Oct. 5, 2016. The monument commemorates a battle between U.S. soldiers and American Indians during the War of 1812. Volunteers included employees of the Illinois Historic Preservation Agency, members of the Daughters of the American Revolution and the Sons of the American Revolution and employees of Toppert Jetting Services. (Dispatch-Argus Photo by Todd Mizener)

The Quad-Cities region has provided a footnote to history for virtually every war fought on American soil, including the Battle of Campbell’s Island – the western-most battle of the War of 1812.

According to the records of Indian historian John Hauberg, as the French and Indian War ended, the last of the French soldiers of the northwest spent the winter of 1760-61 near present-day Rock Island, ice bound, on their retreat from Michilimackinac to Fort Chartres, Ill., following the British conquest of Canada.

All Indian villages in the upper Mississippi and Great Lakes were canvassed by British agents to enlist Indians for fighting in the frontier during the Revolutionary War.

The Americans, even before General George Rogers Clark conquered the Illinois country in July 1778, had agents who had succeeded in keeping the Sauk and Meskwaki from joining the British ranks. With the arrival of Gen. Clark, messengers were sent to all of the tribes inviting them to come to Cahokia to join in treaties of peace.

According to the writings of Hauberg, the Sauk held to the middle ground – trading with the British but also with the Spanish at St. Louis and with the Americans in Illinois.

In 1780 the British hatched a plan to retake the entire Mississippi Valley. Representatives of all tribes were forced to serve. The first attack was at St. Louis, but according to some accounts the Sauk and Meskwaki held back. Other Indians, fearing a rear attack from them, held back too and the grand scheme of conquest failed.

American Gen. Clark wanted to punish those who had aided the British. In 1780, Lt. Col. John Montgomery and 350 men came up the Illinois River to Peoria, then to the Sauk village of Saukenuk – the modern day site of Rock Island – on the Rock River.

One report said 700 Sauk warriors withdrew without resistance and watched as the Americans burned their village. According to reports by Hauberg, the Sauk, who had been America’s friend, had been mistaken for the enemy. While history is uncertain on this point, this may have been the western-most battle of the Revolutionary War.

In July 1814, during the war with Britain, an expedition led by Lt. John Campbell was heading north in five keel boats to reinforce and resupply the U.S. fort at Prairie du Chien, Wis., and stopped at Rock Island. They spent two days eating and drinking with the warrior Black Hawk and his men and the Americans became friendly with the Indians. 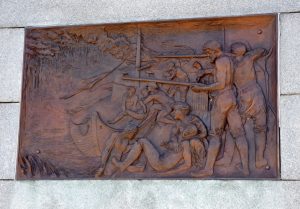 A bronze plaque depicting the battle fought in 1814 on Campbell’s Island between U.S. soldiers and American Indians led by the warrior Black Hawk. (Dispatch-Argus Photo by Todd Mizener)

In his autobiography, translated by Antione LeClaire and edited by J.B. Patterson, Black Hawk said they had no intention of hurting the Americans. But during the night, the British arrived down the Rock River with six kegs of powder and told them that the British had taken the fort at Prairie du Chien and wished for the Sauk to join them in the war, which they agreed to do.

The next morning, July 19, 1814, Black Hawk and 500 braves were hidden along the river as the American expedition entered the head of the Mississippi River’s dangerous Rock Island Rapids. While passing what is now called Campbell’s Island, the wind came up and blew Lt. Campbell’s boat to shore.

“This boat the Great Spirit gave us,” according to Black Hawk’s account in his autobiography. “We advanced to the river’s bank and commenced firing at the boat. … I encouraged my braves to continue firing. … I prepared my bow and arrows to throw fire to the sail, which was lying on the boat; and after two or three attempts, succeeded in setting the sail on fire.” The boat was soon in flames.

“One of the boats that had passed returned, dropped anchor and swung in close to the boat on fire and took off all the people except those killed and badly wounded,” Black Hawk related. “They did not return fire. … I therefore ordered a rush to the boat. When we got near, they fired and killed two of our people, being all that we lost in the engagement. Some of their men jumped out and pushed off the boat and thus got away without losing a man. I had a good opinion of this war chief (Lt. Campbell) – he managed so much better than the others. It would give me pleasure to shake him by the hand.”

In September, U.S. Army Maj. Zachary Taylor was sent with a fleet of eight protected keel boats and 334 men to destroy Black Hawk’s village and uproot the crops. 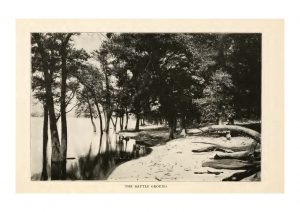 A view of the beach where the Battle of Campbell’s Island took place from Gorge Meese’s 1914 summary of the battle. (Photo courtesy of Rock Island Arsenal Museum)

According to accounts written by historian Hauberg, as the fleet approached the mouth of the Rock River at the Mississippi, the wind shifted and reached gale proportions. They put in at Pelican Island and were attacked by Indians and British six-pound cannon and swivel guns. The expedition fled back to St. Louis.

All of these western military activities led to the construction of Fort Armstrong in 1816. It was abandoned in 1836 after Indian warfare died down and from 1840-45 was an ordnance depot. In 1861 efforts began in earnest to build a national arsenal on the island. It was approved by President Abraham Lincoln in July 1862.

Roger Ruthhart, the former editor of The Dispatch-The Rock Island Argus, was recently inducted into the Lincoln League of Journalists. He can be reached atroger.ruthhart@gmail.com.