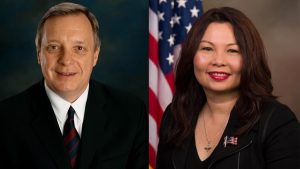 U.S. Sens. Dick Durbin, vice chairman of the Defense Appropriations Subcommittee, and Tammy Duckworth said that state sites playing a role in national defense are included in appropriations funding that passed the Senate.

The legislation, which passed Sept. 19, will head to the U.S. House of Representatives for final passage before being sent to the president for his signature.

“Passing appropriations bills on time is about being good stewards of the taxpayers’ money. Thanks to good work on both sides of the aisle, we are looking at real savings in every part of the Pentagon just by getting our work done on time,” Durbin said. “From Rock Island Arsenal to Scott Air Force Base and Naval Station Great Lakes, Illinois plays a key role in our nation’s defense. This bill safeguards that role and Illinois defense jobs by continuing investment in our state’s defense installations and initiatives.

“Additionally, this bill boosts critical funding in medical research at the National Institutes of Health and the Centers for Disease Control and Prevention, will help our states better respond to the ongoing opioid epidemic, and invests in critical education programs and grants that help make college more affordable for middle-class families. Though I’m disappointed my bipartisan provision to require pharmaceutical companies to reveal drug prices in direct-to-customer TV advertisements was not included in this bill, I remain hopeful that enough senators share my concern with rising prescription drug costs, and recognize the urgency to hold Big Pharma accountable. It is time to stop paying lip service to high drug prices and actually do something about it.

“The outcome of much of this bill shows what we can accomplish when Democrats and Republicans work together.”

“I’m proud to support this bipartisan legislation that increases funding for life-saving medical research, Pell grants and affordable childcare programs, and will help states better respond to the opioid crisis,” Duckworth said. “This bill gives service members a much-needed pay raise, boosts critical Illinois priorities and includes instructions I authored reminding the Department of Labor to prioritize the creation of job-training programs in communities like Golconda, Ill., that have experienced Job Corps center closures. I also applaud Senator Durbin and the Appropriations Committee for their work to secure funding for our military arsenals — which produce the equipment that keeps the brave men and women of our Armed Forces safe — and I’m glad this bill would extend the Humvee production line at the Rock Island Arsenal for years to come.”

Funding for Illinois defense installations and priorities in the bill include:

The bill also includes funding for health and education priorities: