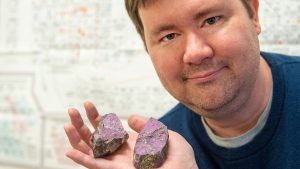 Dan Hummer, assistant professor in SIU’s School of Earth Systems and Sustainability, holds a sample of the manganese mineral purpurite, which would have formed after oxygenation of the Earth’s atmosphere. In a study published Friday, Hummer provides important answers about how Earth chemically and geologically evolved after this event. (Photo by Russell Bailey)

The appearance of oxygen in Earth’s atmosphere some 600 million years ago was one of the most radical events in the planet’s history. Now, a researcher from Southern Illinois University Carbondale, using massive databases and careful mathematical analysis, is pulling back the veil on what this process can tell us about the way the planet changes.

In a study published in Nature Communications, Daniel Hummer, assistant professor in SIU’s School of Earth Systems and Sustainability and the paper’s lead author, provides important answers about how Earth evolves chemically and geologically. The study shows that oxygenation of Earth’s atmosphere, which started with the emergence of photosynthesizing bacteria, eventually also led to oxygenation of its crust.

“One of the most important things that geologists want to understand is how changes in one part of the Earth affect other parts of the Earth, so we can put together a more complete story of how our planet changed over time,” said Hummer.

Funded by the W.M. Keck Foundation, Alfred P. Sloan Foundation and NASA, the study by researchers from multiple universities is expected to have a major impact on geology going forward, as it puts to rest when oxygen went about entering the Earth’s crust after first appearing in its atmosphere.

Scientists long suspected the introduction of atmospheric oxygen probably changed Earth’s solid material, as well. But Hummer’s analysis shows that moving oxygen from the atmosphere to the crust took 66 million years, a long weekend in geologic terms but a lag in cause-and-effect that geologists find telling.

The lag is a major clue about how large-scale changes take place in Earth conditions. It also tells us that some combination of very slow geologic processes is responsible for mixing oxygen into the crust, which will now allow geologists to examine what some of those processes might be, Hummer said.

“The longtime lag probably indicates that large chemical changes likely happen in the atmosphere before they happen in other places in the Earth, no matter how they are triggered,” Hummer said. “Now that we know more about the ‘what’ of Earth’s major shifts, it opens the door to learn more about the ‘how’ of those shifts.”

Earth often is described as a spaceship — a closed, interdependent system traveling through emptiness. Scientists therefore always want to understand how a change in one part of this system affect other parts.

For geologists in particular, the appearance of oxygen and its effects has long been a missing link to understanding how the planet evolved over its millions of years.

“Our work shows that when the atmosphere changes, other Earth layers also change, but it can take a long time for those changes to catch up to what’s happening in the atmosphere.”

While you might picture geologists in the field, busily chipping away samples with rock hammers, modern geology also relies heavily on datasets, computers and powerful analytic tools to make sense of the vast — though disparate — information already available. For this study, Hummer and his team pulled very large datasets from all over the world containing information about manganese occurrences. Because of its well-understood and reliable reaction with oxygen, these minerals provided a key signal about oxygen’s growing effect on the Earth’s crust as it also increased in the atmosphere.

“By looking at broad trends in these large datasets, we now have the first clear picture of the nature, magnitude and timing of those changes,” he said. “It’s very exciting to see because it pulls back the curtain on what happened to Earth after oxygen levels rose.”

The sheer amount of data and corresponding analysis was a consistent challenge to the researchers.

“The main challenge was trying to do math and statistics with such an extremely large dataset in a consistent way,” Hummer said. “The dataset included hundreds of thousands of mineral occurrences and thousands of geologic ages. It was a lot to sort through.”

As Hummer and the team teased the meaning out of the data, it became clear that manganese atoms changed their electrical charge and produced new types of minerals as oxygen accumulated in the atmosphere and reacted with rocks, Hummer said.

The paper was the product of work conducted in 2015-17. After all that, the next challenge was navigating the paper through the peer review process, which while taking years to accomplish, is a necessary part of building a reliable scientific record.