Marking the 50th anniversary of Special Olympics, the Eternal Flame of Hope monument was illuminated on July 20 on Soldier Field’s north park along McFetridge Drive.

Soldier Field was the launch location of Special Olympics a half-century ago. 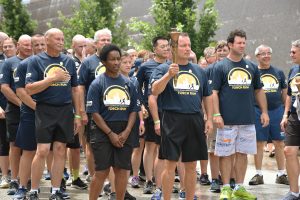 Celebrations during the week for 2018 included an international Unified Cup soccer tournament, a Northerly Island Saturday concert featuring Chance the Rapper and the Global Day of Inclusion Family Fest at Soldier Field.

On July 20, more than 70 landmarks, stadiums and renowned buildings around the world turned red as part of Light Up for Inclusion, a global display of unity.

Members of the Shriver/Kennedy family attended the noon flame Chicago igniting ceremony on Friday. Eunice Kennedy Shriver was the founder of Special Olympics.

“This is amazing, to be at the birthplace of the first-ever world Special Olympics acknowledgement, it’s incredible,” said Missy Ruvaldt, cheer coach at the Notre Dame School of Dallas, who chaperoned members of the uniformed squad. 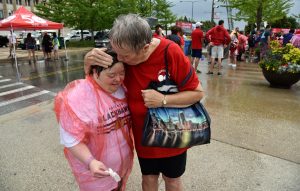 The ceremony began with a Commemorative Run team of participants, with and without intellectual disabilities, who carried the torch to the monument for the lighting ceremony.

The 23-foot monument is a permanent structure designed by sculptor Richard Hunt.

Rain was steady during the morning with 73 degree temperatures, but the sun came out briefly after noon in time for speeches.

Chicago Mayor Rahm Emanuel had to suddenly shorten his speech when a cloudburst exploded over the audience.

“A spotlight was put on ability, not disability,” Emanuel said to event attendees of Special Olympics launched 50 years ago. 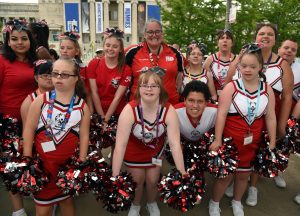 Missy Ruvaldt (center), cheer coach at the Notre Dame School of Dallas, is with members of the squad before the ceremony. (Photo by Karie Angell Luc/for Chronicle Media)

“A force for greatness in the globe began here in the City of Chicago,” the mayor said.

Despite the sudden downpour, the eternal flame was illuminated with rain abating and with cheers.

“It can’t stop anything, the rain can’t,” said Kathy O’Brien of Chicago who attended with her sister Meg O’Brien, also of Chicago.

Before the ceremony, people with umbrellas and rain gear lined a walkway leading from Soldier Field to see the torch flame carried in after the Law Enforcement Torch Run kick off at 39th Street and Lake Shore Drive. 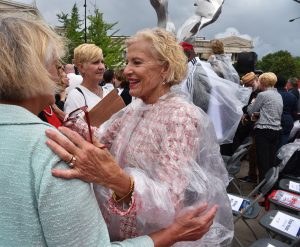 “The honor is being a part of the Special Olympics movement,” said a Commemorative team member.

Illinois Supreme Court Justice Anne Burke, a speaker, was among leading supporters of the launch games.

“On the morning of July 20, 1968, 1,000 courageous young athletes paraded to this historic lakefront stadium and ignited a torch of hope, valor, progress and achievement,” Burke told the ceremony audience.

“Today, on its golden anniversary of that remarkable event which truly has changed the world, we dedicate the eternal flame of hope monument,” Burke said. “Special Olympics brightened the world and offered it a new hope. “I feel it’s so surreal to be here.” 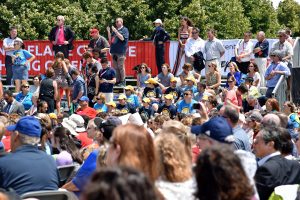 The sun is out and the ceremony continues. (Photo by Karie Angell Luc/for Chronicle Media)