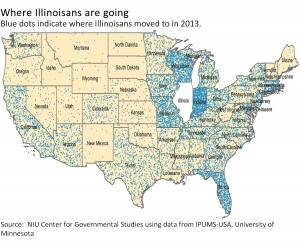 Illinois has yet to beg “Stay, you retired, you job poor, you huddled masses yearning to breathe warm air.”

But it soon may.

If you think there have been more moving trucks in town lately, your eyes are not deceiving you.

Illinois saw more than 100,000 people leave its borders in the past year, the first time the state has seen the number of people leaving hit six figures.

Even when you factor in that Illinois gained 37,600 international migrants and the natural growth of births minus deaths, the Land of Lincoln still showed a net population loss of 22,200. Not surprisingly, Illinois was the biggest loser in that category, one of only seven states to have a net population loss. The others were Connecticut, Maine, Mississippi, New Mexico, Vermont and West Virginia.

Yepsen said that there are a number of factors that contribute to an exodus of residents, but “a lack of job opportunities is the biggest single reason.”

He said some studies have argued that the state’s tax code contributes to the out-migration, but other studies have contradicted that.

One factor out of politicians’ hands (and everyone else’s), Yepsen pointed out, is the weather. Many longtime Illinois residents, he said, are retiring to warmer climates to be with their grandkids.

“There is not much you can do about the climate,” Yepsen said. “They head south because their baby boomer kids and their grandkids live there.”

The Chicago metropolitan area, which the Census Bureau defines as the city, suburbs and parts of Wisconsin and Indiana, is not immune from the exodus. The Census Bureau said Thursday that the Chicago area lost 6,263 residents in 2015, its first population drop in more than 25 years.

Yepsen said the ongoing violence in Chicago plays a part in that.

“I think it does encourage people who can leave to do so,” Yepsen said. “It discourages people from moving into the area. It is not the whole package, but it is clearly a factor in deciding where to live for some people.”

Yepsen said making the business climate in the state more attractive would go a long way to keeping residents and drawing new ones.

“Right now, that is really stressing the public sector, state and local governments and universities. People are leaving those jobs,” Yepsen said. “What troubles me more than people leaving is the people who opt not come here in the first place and there is no way to measure the students who decide not to come here, the people who decide because of the budget deficit and unemployment that they are not going to go to Illinois. I know it is out there.”

In United Van Lines’ 39th annual National Movers Study, Illinois ranked third, behind New York and New Jersey, for the most people moving out in 2015.

The Pacific Northwest, according to United Van Lines, is the go-to location with Oregon being the most popular moving destination last year. The state has seen a 10 percent increase in inbound migration in the past six years, the moving company noted. Another Pacific Northwest state, Washington, cracked the moving business’ top 10 of inbound destinations in 2015.

The data “reflects longer-term trends of people moving to the Pacific West, where cities such as Portland and Seattle, are seeing the combination of a boom in the technology and creative marketing industry, as well as a growing ‘want’ for outdoor activity and green space,” said Michael Stoll, economist, and professor and chair of the public policy department at the University of California, Los Angeles.

“The aging boomer population is driving relocation from the Northeast and Midwest to the West and South, as more and more people retire to warmer regions.”