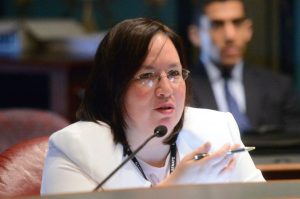 State Sen. Cristina Castro (D-Elgin) has called for creation of a 26-member task force to get public input and examine how $108 million from the Volkswagen Clean Air Act settlement should be allocated in Illinois. (Photo from Castro’s website)

A state senator is looking to create a panel to examine and get input statewide on just how more than $100 million in clean air funds should be spent.

Sen. Cristina Castro (D-Elgin) said that a task force she is proposing would get public input on just how the $108 million coming to Illinois in the Volkswagen settlement will be allocated. The Illinois Environmental Protection Agency got comments from residents through a survey on its website through Friday as its avenue of getting residents’ views on the allocation of funds.

“There has been a lot of confusion,” Castro said of the IEPA survey. “Many people felt there was not enough open discussion in regard to the IEPA coming up with its plan.”

The IEPA has proposed that 65 percent of the VW funds go toward off-road efforts to reduce air pollution, such as new engines for Metra trains.

The $108 million windfall for Illinois stems from Volkswagen AG and some of its North American subsidiaries entering into a multibillion-dollar settlement with the federal government for violations of the Clean Air Act. VW publicly admitted to installing “defeat devices” in certain diesel vehicles causing the vehicles to operate differently during emission testing compared to normal operation, circumventing federal vehicle emission standards.

Castro felt that the IEPA survey alone was not enough input to move forward with the IEPA’s allocation plan.

“We are a state of 12.8 million people. There were 1,100 comments submitted,” the Elgin senator said.

During questioning from Castro last week at a state hearing, IEPA Director Alec Messina said he felt that the 1,100 survey respondents were enough public input for the state agency to move forward with its allocation plan, a position Castro refuted.

“Eleven hundred comments, how is that representative of people in the state?” Castro asked in a Chronicle interview.

Castro has called for a 26-member task force to tackle the VW settlement issue. The panel, under Castro’s legislation, would include the director or a representative of the IEPA; appointees of the Illinois Department of Transportation and Illinois Department of Public Health; appointments from the state Senate president, House speaker and both Republican legislative leaders; representatives of the Regional Transit Authority and Chicago Transit Authority; an appointee of Argonne National Laboratory; a member on behalf of the Cook County Forest Preserve District; and a representative of labor unions.

Senator Castro said she is open to adding even more representatives to the task force when her legislation moves to the state House. Everyone wanting to be at the table for discussion on how to use the Volkswagen money will get a say, she said.

“It is so important to have everyone in the room to vet out ideas and go back and forth, to all decide on the issue, hearing what everyone thinks,” Castro said. “The task force will have public hearings in different regions.”

The task force members would not be paid, according to Castro’s legislation, but would be reimbursed for “reasonable and necessary” expenses incurred while working on the project.

Castro’s legislation mandates that the task force would have six public listening sessions statewide, hearings that never materialized under the IEPA despite promises from Messina last May that the agency would adopt a “very aggressive public outreach campaign.”

Her proposal would also extend public comment via the IEPA survey another four months.

States have up to 10 years to spend their VW settlement money.

A report from the task force on public input and thoughts on how to allocate the VW funds would be due by Jan. 1, according to the legislation.

Castro said she hopes to get her legislation through the Senate this week. She said there is support for the measure from Republican senators, although some, she noted, are ready to spend the VW money now.

“How do you spend the money without a plan?” Castro asked. “Members on the Republican side do recognize that public input in this process has been poor.”

Castro said Messina has seemed to indicate that the IEPA does not have to go through the General Assembly for allocation of the VW settlement. That is not the same view that lawmakers have, Castro said.

“We want an open and transparent process.,” Castro said. “We need checks and balances. We need to test the hypothesis.”

Castro said steps need to be taken to ensure public input is gained before funds from the settlement are allocated.

“I think it is very important to involve taxpayers in the process,” Castro said. “We need to make sure the $108 million is spent wisely and smartly. We don’t want to be wasteful. We want to impact the citizens who were affected when VW shoved bad emissions into the air.”