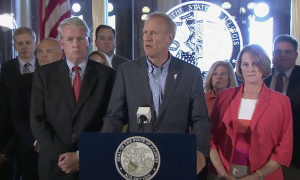 For a state that has been livin’ on a prayer – and court decrees – for agency funding, a stopgap budget that only gets “halfway there” seems both ironic and appropriate.

State lawmakers’ compromise move Thursday to approve a six-month budget ensures that schools dependent on state funding, including Chicago Public Schools, open in the fall. It also ensures that state mental health centers, veterans homes, and human services programs not already covered by court decrees will be funded through Dec. 31.

“It allows important services like schools to have the certainty of knowing they will be open all year, and keeps other services running while their budgets are worked out,” said state Rep. Tom Bennett, R-Gibson City. “Most importantly, it avoids the chaos and concern that gripped so much of Illinois last summer and fall as the state proceeded without a budget.”

“By being so intensely involved [legislators] learned, there is no honeypot of money out there. Everything must be paid for,” she said.

State Rep. Jack Franks, D-Marengo, said that state will have plenty of chaos to face after the General Elections in November when “massive tax increases” will be needed to balance the budget.

Franks was one of only four lawmakers to vote against the stopgap budget.

“They passed (the stopgap budget) knowingly and willingly violating the Illinois Constitution. The constitution says that revenues must meet expenditures.”

Franks, who also voted against the Chicago schools bailout, estimated that the state deficit will balloon from $8 billion to as much as $14 billion by year’s end because of the stopgap move.

Along with Franks, members of the state House voting against the budget were: David McSweeney, R-Barrington Hills; Jeanne Ives, R-Wheaton; and Tom Morrison, R-Palatine. The state Senate unanimously approved the stopgap measure.

Franks said the time to put through a balanced budget has expired and that residents should brace themselves for tax increases after the election.

Franks said the state’s politicians are selling a line to residents.

“They are all lying to the public,” Franks said. “They don’t have the guts to tell the truth because they are afraid of not getting re-elected.”

State legislators who voted in favor of the stopgap measure felt it was at least something to keep state government functioning through the end of the year.

“While my preferred path would have been a full-year budget accompanied by economy-boosting structural reforms to state government,” said state Sen. Karen McConnaughay, R-West Dundee, “it became clear that my colleagues across the aisle were not going to meet us halfway on a full-year budget until after the November election. What we have here is a responsible short-term plan that offers reassurance to those who rely on state funds.”

McConnaughay said that the six-month budget includes $1 billion for Illinois’ struggling higher education system to ensure that all public universities and community colleges can operate through the fall semester and fund Monetary Assistance Program grants for low-income students. That money is on top of $600 million already approved by lawmakers in the spring.

Business leaders are not rallying behind the stopgap move.

“The stopgap should not be considered a victory for Illinois taxpayers and businesses,” said Greg Baise, CEO and president of the 4,000-member Illinois Manufacturers’ Association. “(The) action is a Band-Aid that will temporarily relieve budgetary pressure, but does not solve the core problems plaguing Illinois.

“Manufacturers lost 15,000 good, high-paying jobs in our state last year and it’s well past time that our elected leaders enact a real balanced budget and pro-business reforms that will grow our economy.”

The leader of the Chicagoland Chamber of Commerce hoped the stopgap is the first step toward fixing the ills of the state.

“Moving forward, we hope leaders in Springfield will work toward a full budget solution for our state and create measures to inject common-sense business reforms that support job creation, generate necessary revenue for the state and put Illinois back on a path to prosperity and growth,” said Theresa E. Mintle, president and CEO of the Chicagoland Chamber.