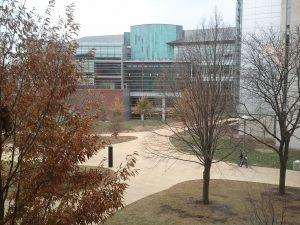 The Thomas M. Siebel Center for Computer Science at the University of Illinois at Urbana-Champaign. (Photo by Joe Futrelle)

Though you wouldn’t immediately think of the downstate University of Illinois in Urbana-Champaign  campus as a school for hackers, it is one of the top coder-producing schools in the world.

Coding website HackerRank.com wanted to see how alumni of the world’s tech schools measured up when faced with coding challenges. They tested grads from 126 schools across the world, and U of I ranked third in the U.S., behind only the University of California, Berkeley, and the Georgia Institute of Technology, and 14th in the world.

“It’s not really surprising that our students would be excelling in something like HackerRank,” U of I School of Computer Science spokesman Colin Robertson said. “We do have a bit of a reputation as a place where coding is a thing, and that hacking is something you can pursue.”

Robertson said most of the school’s students are from Illinois, but others are from all over the world, and a lot of them stay.

“A high number of them stay in the state,” Robertson said. “I believe about half stay in-state. A lot go to Chicago,” but he said a number of students also go to the West Coast or simply to better climates, as many coding jobs can be done remotely.

Robertson said strong math fundamentals are a must to be a successful coder, but what sets one apart from the rest is creativity in the way that math and coding are applied. The average enrollee’s ACT score in 2016 was 33.5.

The top schools in the world were in Russia, China and Vietnam.

— U of I ranks third nationally, 14th globally on website’s best-coder-schools list —