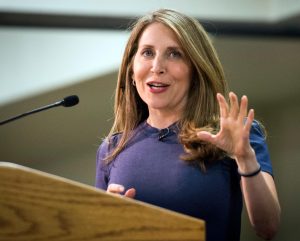 Jessica Yellin, a former CNN political reporter, is not surprised many voters seem to be ill-informed these days.

“The free press is the only business that is explicitly protected in our Constitution,” said Yellin, CNN’s former chief White House correspondent. “And that’s because it’s vital to a functioning democracy. When the people who are running it are not respecting its role and its value to our democracy, we all have a problem.”

Speaking recently before a group of 250 students, faculty and the public at Bradley University, Yellin offered an insider’s view on what has been called a peculiar and bizarre presidential election that began with 17 Republican candidates in the primary and now pits Republican Donald Trump against Democrat Hillary Clinton.

“In the last year and a half, the (television) media handed over the microphone to Donald Trump unchecked and unmediated,” said Yellin, whose long history in journalism included stints at MSNBC, ABC and Good Morning America. “Whatever your politics, this wasn’t a Democrat-Republican thing. This was a TV ratings thing. Donald Trump is killer good for ratings, so a number of news networks just let him have a platform to talk without reporters intervening or fact-checking or qualifying what he said.”

The cable TV news networks were eager to give Trump more airtime because he was great for the bottom line, but after it looked like Trump was starting to win the networks jumped into action and let their reporters do their jobs, she noted.

“The fact that they back-loaded all their reporting to these last days makes the media outlets often look as though they’re trying to take Donald Trump down, when in fact what they’re doing is finally unleashing their reporters to do the job they should have been doing all along,” Yellin said.

Explaining how this happened, Yellin noted that TV networks are competing for ratings in ways we’ve never seen before.

“They’re desperate for profits to stay alive, so they’re doing whatever it takes to keep the show entertaining. The idea is to sell out as hard as you can until you hit that shame wall, and then you have to backpedal as quickly as you can to maintain your dignity,” she said. “So I think we have hit the shame wall, and it’s becoming embarrassing not to do the real reporting on Trump.”

Yellin acknowledged that more aggressive reporting could also be done on substance and policy issues relating to Clinton, but added, “I never need to hear more details about her emails as long as I live. I think we got the picture.”

Overall, Yellin blamed the broadcast media’s loss of credibility on “a couple of TV news executives making it really bad for everyone else in journalism and everyone out there watching.”

Contributing to the problem are budget cuts that have resulted in the elimination of research departments at most TV news networks and pressure on journalists to avoid any reporting that makes them seem partisan, she explained.

“The role of a journalist in society is to be a human being who takes your experiences and your knowledge and your eyes and observations out into the world and holds our leaders accountable and reflects our world back to other people and speaks truthfully about what you hear and see,” Yellin said. “That involves sometimes taking positions and saying things that might make you unpopular. For example, calling B.S. on a candidate who keeps bending the truth. And if one candidate is bending the truth every time they speak, and you’re calling them out more, that’s not bias. That’s doing your job.”

A dangerous result of these changes has been the elimination of important stories, she noted.

“We’ve cut out all the stories that would require research. The default is to provide less information. Vague is always safer,” Yellin said.

A Harvard graduate who’s interviewed numerous presidents, provided coverage from battleground states in the last two elections and reported from around the globe, Yellin said, “I had amazing experiences and wonderful opportunities, but over time I found I really couldn’t do the kind of reporting I wanted to do.”

She said her feelings were validated shortly after leaving CNN on the day President Obama announced that he would be keeping troops in Iraq longer than he had planned, and TV news networks spent as much time talking about the fact he wore a beige suit during the announcement as they did about the implications of what he said.

“The biggest change in all of it, I think, is the fact that so many of these news channels are owned by publicly traded companies,” Yellin said. “They’ve always been in private hands, have always been a for-profit business, and that’s fine. But it’s when they became part of these publicly traded entities that things changed because….the most important thing has become how are we going to make our shareholders happy.”

Yellin left the crowd with some hope for the future, however.

“The power is in your hands,” she said, speaking mostly to the students. “They are trying to seduce you because you’re the (demographic) they want.”

She urged the crowd to find news sources they trust, recommending websites such as mic.com, theskimm.com, vox.com and Quartz at qz.com.

“You can do something about it,” Yellin said. “Either get organized to change the media institutions or help create new institutions, because I think you guys are the generation that’s going to save the free press in America. That’s a big burden on your shoulders, but I know you’ll get there.”