Lori Hendren, associate director of AARP Illinois, said that the poll results show that Illinois voters think the state is headed down the wrong path. (BlueRoomStream.com)

Nearly three-quarters of registered voters in Illinois know someone considering leaving the state and nearly half of residents have considered relocating themselves, according to a new poll.

The AARP poll shows that voters are fed up with the state’s current fiscal situation.

Joe Woodward, a volunteer with AARP Illinois, said the survey yielded “shocking findings about the depth of voter anger, their disillusionment and concern over Illinois’ continued fiscal crisis.”

“Nearly three in four of Illinois’ registered voters say they lack confidence that Springfield’s recent budget deal will reduce the state’s long-term fiscal problems,” said Woodward, a retired state worker. “That lack of confidence is having a corrosive effect on the residents’ commitment to the state. It is disturbing to acknowledge this, but we must face facts.”

The AARP volunteer said Illinoisans are losing faith in our shared future.

“Our elected state leaders must come to grips with our fiscal mess if Illinoisans are to have the future they deserve,” Woodward said in revealing the poll results at an Oct. 2 Springfield press conference.

He said survey respondents cited high taxes, government mismanagement and the high cost of living as the top three reasons for leaving the state.

“Voter anger is intense,” he said, noting that two-thirds of Illinois registered voters age 25 and older rate their anger about the state’s fiscal situation as a ‘4’ or ‘5’ (with ‘5’ being “extremely angry.”

Other key findings in the poll include: 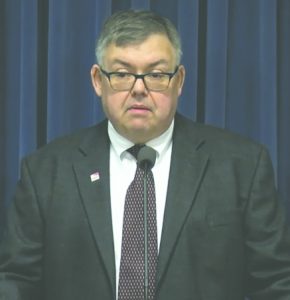 Joe Woodward, a volunteer with AARP Illinois, talks about the results of a survey of Illinois registered voters age 25 and older. Woodward said the results show that “voter anger is intense.” (BlueRoomStream.com)

AARP commissioned Alan Newman Research to conduct the poll among registered voters age 25 and older in Illinois in July on behalf of AARP Illinois. ANR completed 1,202 telephone interviews — 600 via land line and 602 via cellular telephone. Data was weighed by age and gender, according to the February state voter database statistics.

Lori Hendren, associate director of AARP Illinois, said that the survey results illustrate very clearly that Illinois is on the wrong path.

Hendren said the numbers facing the state are staggering:

“Now is the time to find a long-term comprehensive solution, an equitable solution,” Hendren said. “These survey results reveal no matter what someone’s age Illinois voters are simply angry at where we are in Illinois. They realize their taxes have already been raised and know more is coming unless politicians in or coming into office put their constituents first and make the difficult political decisions needed to put Illinois on a path to restored fiscal health.”

Hendren said voters need to hold candidates’ feet to the fire and make them explain how they would right the state’s financial ship.

“This is a call to action,” Hendren said. “…  Voters, demand action. Simply, enough is enough.”

The AARP associate director pointed out that voters realize there will be personal pain to make things better in the state, citing 57 percent of respondents said it would take both revenue increases and spending cuts to stabilize the state’s financial picture.