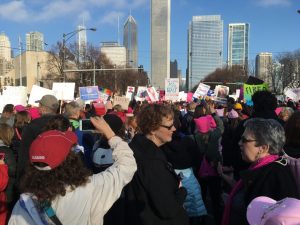 An estimated 250,00 people gathered in Chicago Jan. 21, 2017 for the National Women’s March Day. Chicago was one of many cities across the country were marches were held. (Chronicle Media file photo)

Women will take to the streets this weekend in Chicago and nine other locations in the state as part of March to the Polls, focusing on the 2018 elections and beyond.

The Chicago event, also called the 2nd Women’s March Chicago, will have music and videos starting at 9 a.m. Saturday, at Congress Parkway and Columbus Drive, with the rally starting at 11 a.m.

“As we approach local, midterm and gubernatorial elections in 2018, it’s even more critical that women are engaged and involved,” Scheller said. “If we want to see progress in this city, state and country, we need women’s votes, voices and leadership.”

Chicago will not be the only place for Illinois residents to take action this weekend. The Heart of Illinois chapter of the National Organization for Women is calling on residents of Central Illinois to come together and take a stand as well Saturday.

“We invite all citizens of Central Illinois who believe in a country that is equitable, tolerant, just and safe for all, and one in which the human rights and dignity of each person is protected, to join us for a Women’s March in East Peoria,” the chapter said in a statement. “We’ve seen how powerful we are when we gather together, share space and lift each other up. Join us as we prepare to take that power to the polls. Together, we will show this administration that women are not backing down.”

In addition to the Chicago event, marches will also be held in:

Speakers at the Women’s March Chicago include women and men dedicated to the shared goal of empowering voters to support women’s rights and social justice, according to organizers. The speakers will include Suzette Wright, a former Ford Motor Co. plant worker in Chicago whose experience of sexual harassment was featured in the New York Times, and Tom Steyer, an activist committed to spending $30 million to boost voter turnout in this year’s midterm elections.

“We are thrilled to have such as extraordinary and powerful group of women and their allies unite to raise their voices on the many issues that continue to affect women every day,” said Carrie Kiley, a Women’s March Chicago organizer. “Together, we are committed to inspiring the people of Chicago to march to the polls in 2018.”

Steyer said getting people to the polls this year is of paramount importance and the Women’s March will focus on that fact.

“This event is all about demanding progress for women and getting involved in this year’s election — the most important mission for all of us in 2018,” Steyer said. “Women’s March Chicago has been at the forefront of this movement, and it’s a real honor and pleasure to join with such a powerful group of women dedicated to change.”

More than 300 events are planned in the United States and across the world this weekend.

Wright’s story puts a face on the issue of sexual harassment, Kiley said

“Many are now learning the story about the sexual harassment Suzette Wright and others faced while working at Ford in the 1990s,” Kiley said. “Twenty-five years later, too many women continue to face the same inexcusable treatment in the workplace. I look forward to marching in solidarity with Suzette in Chicago and demanding the culture change all Chicago women deserve.”

Women March Chicago organizer Liz Radford said the speakers at the rally are individuals working to change the political system and climate.

“Our speakers reflect the focus of this year’s march — turning energy into votes,” Radford said. “These are women and allies working within and challenging the political system to be inclusive, supportive of all women and people of color, and to more directly reflect the demands of the people. There is a lot of work to do and our speakers are on the front lines.”

Chicago actor, writer and producer Fawzia Mirza returns as the march emcee. The march will also include performances from cast members of “Hamilton,” featuring Ari Asfar; the Bryant Jones Choir, featuring Deborah Lane; Bridget Marie of ZaZaZa Disco; So Chi Voices; Faces for Radio; and Second City’s “She the People.”

In addition to Wright and Steyer, other planned speakers at the Chicago march are: