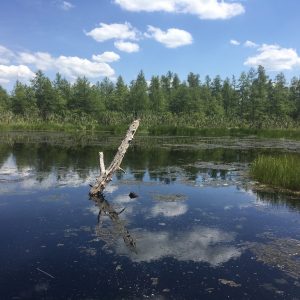 Volo Bog, in Lake Co., formed during the last ice age, when large sheet of ice broke off and got trapped under a glacier, according to retired chemist John Fairgrieve. The lack of stream fed water leads to a stagnant body of water. “When you leave a glass of water on the counter overnight, you’ll notice bubbles formed,” Fairgrieve explained. “That’s dissolved oxygen leaving the water. The same thing happens in a kettle hole.” 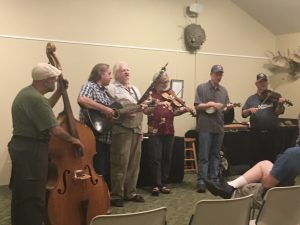 Bog Day was started in Scotland in 1991, and quickly caught on in the U.S., Canada, and Europe.

Maintained by the Illinois Department of Natural Resources (Illinois DNR), Volo Bog State Natural Area is located about a mile west of U.S. Route 12 between the towns of Volo and Fox Lake.

The bog was designated a National Natural Landmark in 1973 as the only remaining open-water quaking bog in Illinois. The site also contains woodlands, savanna, marshes, prairie restoration areas, shrubland and fields.

Bogs present a unique ecosystem, said Fairgrieve. Living things need oxygen to grow, but even microbial growth is diminished or absent in a bog. Plant material tends to build up and provide nutrients for new plants. Larger shrubs and tamarack pines develop root systems that run close to the surface rather than deep into the ground. These features, combined with unique vegetation like spagnum moss, create a sponge like surface that can be more solid in some places than in others.

Bogs in Scotland and Europe have “coughed up” corpses that remain preserved for hundreds of years. Since the first bog was discovered in the late 1700s, over 1,000 bodies have been discovered. A well-preserved Roman-era corpse of a 25-year old male was found in the 1980s in the Lindow Moss Bog in northern England. Lindow Man II, now displayed at the British Museum, was found with preserved clothing with ginger hair and skin well preserved.

History has not recorded any human remains popping out of Volo Bog, but legend has it that three cows wandered into Volo Bog from a nearby farm and never came out. Perhaps someday, a visitor will discover the remains.

Naturalist Stacy Iwanicki had her own story to tell. A new graduated from Michigan State University, Iwanicki took her dog for a walk in a nearby bog. “One minute he was standing beside me, and the next minute he was gone,” she said. “Luckily he was on a leash, so I just pulled him up out of the bog.”

Dead plant material in a bog’s acidic environment eventually forms peat, a precursor of coal. Peat is used for heating in some parts of the world. China is mining peat from Canadian bogs to burn in their manufacturing factories. Because the practice is destroying bogs, peat mining is discouraged by environmentalists.

Volo Bog is opened year-round from 8 a.m. to 8 p.m. Visiting a bog in different seasons provides a view of varying animal and plant life.

Volo Bog might be one of the few places in Lake Co. that is virtually free of mosquitoes this summer. The acidic nature of the water is hostile to the insect.