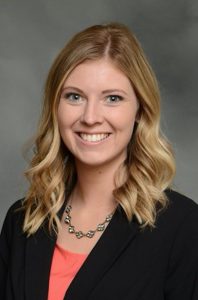 The Illinois Pork Producers Association named Jenny Jackson as its new director of communications. Jackson has been serving as the marketing manager for J.O. Harris Sales, Farm Equipment, since May of 2015.

This week’s ag news is led by President Trump’s executive order to ditch the Waters of the U.S. rule. This was welcomed by many in the ag industry who had been fighting the EPA rule. Also in the news, a longtime Illinois pork producer has been named president of the National Pork Producers Council. For details on these and more current news summaries for Illinois farmers and rural dwellers, please read on …

WASHINGTON, D.C. — When the U.S. Environmental Protection Agency (EPA) and Army Corps of Engineers established the Waters of the United States (WOTUS) rule during the Barack Obama administration, it drew the immediate ire of farm groups who felt the regulation, which intended to protect sensitive waters from field nutrient erosion, had overstepped previous legal parameters. Last week, President Donald Trump ordered the WOTUS rule dismantled under an executive order. The move was met with support by the House Committee on Agriculture, which includes Illinois Rep. Rodney Davis (R-13th) and Rep. Cheri Bustos (D-17th).

“Over the past eight years, EPA and the Army Corps of Engineers have repeatedly ignored the concerns of our nation’s farmers and ranchers in their quest to implement the WOTUS rule,” stated House Ag Committee Chairman K. Michael Conaway (R-Texas), in an official committee news release. “I applaud President Trump for taking the first steps to dismantle this egregious example of regulatory overreach.”

American Farm Bureau Federation President Zippy Duvall also heaped praise on Trump for his executive order. “EPA has too long been characterized by regulatory overreach that disregards the positive conservation efforts of farmers and threatens their very way of life,” said Duvall, who characterized WOTUS as nothing more than a federal land grab. “Under the rule, the smallest pond or ditch could be declared a federal waterway.”

BLOOMINGTON — An “official” with the Donald Trump administration allegedly contacted Renewable Fuels Association (RFA) Chief Executive Bob Dineen to convey that a pending White House order would remove oil refiners’ obligation under the Renewable Fuel Standard (RFS) to blend ethanol with petroleum. The RFS would be maintained, but responsibility for compliance would be shifted from refiners to fuel blenders. The reported rule change could have financial consequences running into hundreds of millions of dollars per year for companies including fuel marketers or retailers, but could potentially benefit oil refiners, Biofuels International reported March 2.

Illinois RFA President Ray Defenbaugh voiced his immediate objection to the reported rule change. “The Illinois RFA strongly opposes any effort to change the Point of Obligation as established by the U.S. EPA under the current RFS,” Defenbaugh stated March 1. “Our position is consistent with that of the EPA as indicated in their November 2016 decision to deny merchant oil refiner petitions to move the compliance point of the RFS downstream to gasoline blenders and distributors of gasoline and diesel from the current point of refiners and importers. EPA’s own analysis of the request concluded that it would not increase the effectiveness of the RFS, and we agree.”

SPRINGFIELD — A longtime Illinois pork producer and chairman of the largest family owned hog production company in North America assumed the role of president of the National Pork Producers Council (NPPC) during the National Pork Forum in Atlanta on March 3, the Illinois Pork Producers Association (IPPA) announced. Ken Maschhoff of Carlyle, a fifth-generation pork producer who previously served on the IPPA board and is a current district director for NPPC, said he has stood alongside his fellow producers through pork industry high and low cycles.

“I continue to witness firsthand how much our industry continue to evolve, and I will work hard as the next president of NPPC to see that our industry continues thriving,” said Maschhoff, whose company produces more than 5 million market hogs per year through its production partner network. As NPPA president, Maschhoff will work for producers in areas such as legislation, regulations and trade initiatives.

The Maschhoffs LLC, based in central Illinois, has a network of over 500 pork production partners in nine states. (IPPA)

SPRINGFIELD — Jenny Jackson, most recently the marketing manager for J.O. Harris Farm Equipment, has been hired as the new communications director for the Illinois Pork Producers Association (IPPA). Jackson, who grew up on a family farm near Jacksonville and holds a bachelor’s degree in agricultural science, takes over for Morgan Booth. Booth left to begin a similar role with the Illinois Department of Agriculture.

“I am incredibly honored to transition to this role. My passion for agriculture and livestock runs deep and I am enthusiastic about promoting this lifestyle,” said Jackson, who showed hogs and cattle for 11 years in 4-H and FFA. “I wish that every child had the opportunity to grow up around livestock. It is truly a humbling experience.”

URBANA — The statewide average temperature for February was a record 40.5 degrees, around 10 degrees above normal average. This is according to Jim Angel, Illinois State Climatologist for the Illinois Water Survey. “All those days with 60- and 70-degree weather paid off; this February was the warmest February on record for Illinois,” Angel said in his weekly weather blog. “It beat the old state record of 40 degrees set back in 1998.”