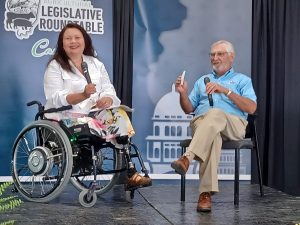 The big news of the week: Crop tours are revealing that the 2022 corn harvest may not be as robust as the USDA has projected. For more information and other happenings in the farm world, please read on …

URBANA — Corn condition is on the minds of producers concerned about achieving maximum yield potential as harvest time nears. At the top of their list of concerns: emergence issues, kernel count, grain length and ear “tipping,” or a lack of kernel presence at the tip of a corn ear.

“This year some of the earliest planted corn struggled to emerge uniformly, primarily due to crusted soils and soil temperatures following a significant April rain event prior to corn emergence. The importance of uniform emergence becomes apparent at this time of the year,” said Russ Higgins, a commercial agriculture Extension educator in Northeastern Illinois.

The Illinois Farm Bureau news service reported that wild weather variations clipped the top end off of corn yield potential in Illinois this season. Scouts on the 30th annual Pro Farmer Tour estimated an average corn yield of 190.71 bushels per acre in Illinois this year, down 2.8 percent from last year’s tour average but up 2.7 percent from the three-year average.

“What we’ve seen on corn is less consistency this year,” said Brian Grete, Farm Journal editor and leader of the eastern leg of the tour, during a stop in Bloomington. “Ear counts are fine. Grain length is the issue this year.”

According to the results of the Pro Farmer Tour, corn ear counts in Illinois were up 1.1 percent from a year ago. However, average grain length was down 2.1 percent while kernel counts, averaging 16.9, were down .2 percent compared to last year’s tour estimates.

Late last week, Pro Farmer scouts reported the nation’s corn harvest would not be as large as USDA had projected in their most recent yield estimates.

Duckworth had busy week with farmers

LEROY — Before answering questions from Illinois farm leaders during the Illinois Ag Leadership Foundation’s Ag Legislative Roundtable at the Schuler Farm in Lexington on Wednesday, Aug. 24, U.S. Sen. Tammy Duckworth visited an Illinois fuel station to promote corn-based ethanol with U.S. Ag Secretary Tom Vilsack on the prior day. The visit came after Duckworth joined as an original co-sponsor to the introduction of Rep. Cheri Bustos’,D-17th, Next Generation Fuels Act in the U.S. Senate. Beginning in 2026, the bill would establish a new high octane, low carbon fuel standard automobile manufacturers can use to improve fuel efficiency and reduce greenhouse gas emissions. If passed, the bill would require that sources of additional octane result in at least 40 percent fewer GHG emissions than unblended gasoline and sets new limits on toxic hydrocarbon aromatics.

Duckworth and Vilsack visited One Earth Energy, an ethanol production facility in Gibson City, before traveling to Leroy for a press opportunity at a Casey’s General Store which offers high-octane ethanol blends. On hand were members of Illinois agriculture and renewable energy groups, including Martin Marr, president of the Illinois Corn Growers Association and a farmer from New Berlin.

“We are so grateful for Senator Duckworth’s leadership, as the Senate members can now begin to consider the role that corn-based ethanol can play in helping our nation achieve its clean energy goals. We know that ethanol has a role to play, as the cleanest liquid fuel available to consumers now with the infrastructure to truly make a difference for our environment,” said Marr. (ICGA news)

SPRINGFIELD — East central Illinois cottage producer Ed Dubrick found that selling his farm’s meat and eggs at neighboring counties’ farmers markets was too costly to maintain, due to a hodgepodge of inconsistent rules and permit fees varying from county to county. Through exposure to the Illinois Stewardship Alliance’s Local Food Farmers Caucus, Dubrick learned that producers all over the state were experiencing the same roadblocks.

That’s when Dubrick, who operates DuChick Ranch in Cissna Park with his partner, Lindsey, decided to join forces with the caucus to draft and negotiate the Farmers Market Permit Act, which was signed into law by Gov. J.B. Pritzker in June. The Act creates new regulations on the sale of meat, eggs, dairy, and refrigerated foods at farmers markets by capping licensing fees and creating consistency between counties, enabling farmers to more easily reach new customers.

For his efforts on behalf of Illinois farmers, Dubrick was awarded the Alliance’s Changemaker of the Year Award during the annual Agriculture Breakfast at the Illinois State Fair on Tuesday, Aug. 16. “Before I found this organization I was just someone who complained about the way food policies are without any real avenue to try address them,” said Dubrick, in an Alliance news release.

“Because of Ed’s leadership and willingness to educate policymakers, he exemplifies what it means to be a Local Food Changemaker,” added Kathleen Mueller, senior organizer with the Alliance. “Real changes can be made when farmers come together to discuss and organize around challenges they face. The Local Food Farmer Caucus is a space to voice concerns and take collective action to get things done.”

SPRINGFIELD — Illinois has more than 4,000 orphaned oil wells. A new federal infrastructure investment will enable the Illinois Department of Natural Resources’ Office of Oil and Gas Resource Management to address 600 to 800 of the well sites, many of which are located in rural communities and on farmland. The funding, freed up through President Joe Biden’s Bipartisan Infrastructure Law, will allow Illinois to begin plugging, capping and reclaiming up to 20 percent of the orphaned oil and gas wells in rural communities around the state.

“This investment will help many Illinois landowners by freeing up their ground for more productive farming and recreation, and it will help protect the groundwater from contamination,” said IDNR Director Colleen Callahan. “Rather than having a rusted, inoperable well on their property, this effort will ensure they no longer have to farm around or look at an eyesore on the land.”