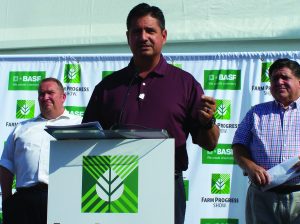 There is a lot of farm and rural news to catch up with from the past week, including the Biden administration’s reversal on doing away with the stepped-up basis in farm inheritance. We also have the farm bureau’s reaction to Biden’s $3.5 trillion tax package, as well as info on the latest land and water conservation efforts by Illinois farmers. Please plow ahead for more …

BLOOMINGTON — The administration of President Joe Biden lost some of the support of farm country when they threatened to remove “stepped-up basis” from capital gains such as farm ownership transitions within families. After pushback from farm country and elsewhere, the proposal, originally part of the administration’s $3.5 trillion federal spending passage (aka the Reconciliation Bill), has now been scrapped. This is according to the House Ways and Means Committee, which said last week the policy would remain unchanged under Biden’s tax package.

“So far, so good,” said Adam Nielsen, director of national legislation for the Illinois Farm Bureau. “I think we’re seeing that our timely action request and our continued vocal opposition to any changes in stepped-up basis have gotten through to Capitol Hill and the Biden administration. We’ll remain vigilant and continue to monitor for any changes as this spending and tax package moves through the House and Senate.”

However, the legislation does include a provision reducing the individual estate tax exemption from $5 million to $3.5 million, where it stood before the 2017 tax cuts — but the higher exemptions aren’t scheduled to expire until the end of 2025, according to the IFB. (IFB news)

BLOOMINGTON — While the Illinois Farm Bureau may be relieved that stepped-up basis is being preserved in the Biden administration’s proposed $3.5 trillion Reconciliation package, neither the IFB nor parent organization American Farm Bureau Federation are enamored with some facets of the bill. Earlier this month, AFBF president Zippy Duvall sent a letter to lawmakers to avoid tax increases on America’s farmers and ranchers and increase communication with the agriculture and rural sectors when making decisions.

For starters, Duvall said the proposed tax package could set back American agriculture for generations to come. “Despite all claims to the contrary, these tax increases will have a disproportionate impact on American family farms, stifle economic growth and rural prosperity and could lead to further consolidation across the agricultural sector, putting multi-generational family farms in jeopardy,” wrote Duvall.

“Impacts to existing farm bill programs could be profound if the proper process is not followed: Public hearings should be held to identify future challenges for the next farm bill. The agriculture industry and the committees of jurisdiction have held to a long tradition of bipartisanship. Farm Bureau believes that widespread support and significant input from a variety of stakeholders strengthens any legislation.” (AFBF news)

SPRINGFIELD — The Illinois Departments of Agriculture and Labor are reminding all farm workers to stay safe during the upcoming and busy harvest season. In accordance with custom, Illinois Governor J.B. Pritzker proclaimed the week of Sept. 19-25 (the month’s third week) to be observed as National Farm Safety and Health Week in Illinois, with the theme “Farm Safety Yields Real Results.”

“It is important to bring awareness not only to the physical dangers of farming, but the emotional toll it takes as well,” said Illinois Agriculture Director Jerry Costello II, in an Illinois e-news release. “While we will highlight roadway safety, chemical safety and other traditional farming hazards, it is also important to encourage farmers to take care of their own health.”

Recent data from the U.S. Bureau of Labor Statistics proves the agriculture sector remains the most dangerous occupational field in America. Each year the farming profession sees 573 fatalities, or 23 deaths per 100,000 workers. Most farmworker injuries and death are caused by tractor overturns, according to the Occupational Safety and Health Administration. These incidents result in about 130 deaths each year nationwide.

Each day during National Farm Safety and Health Week, the Illinois Department of Agriculture will highlight emerging issues and important topics concerning farm safety on the department’s Facebook and Twitter social media platforms.

“The 2021 Biennial Report highlights accomplishments and new efforts from each sector, which were noteworthy given the increase in precipitation events experienced in Illinois and other states within the Mississippi River basin,” Kim stated. “Work continues by all partners to incorporate additional recommended practices to achieve needed nutrient reductions. We remain committed to the goals established in the 2015 Strategy and look forward to continuing our efforts alongside all stakeholders as we address these challenges.”

In lockstep, the Champaign Soil and Water Conservation District’s STAR (Saving Tomorrow’s Agricultural Resources) initiative issued their annual report documenting the in-field practices adopted by area farmers enrolled in the program. For the 2020 Crop Year, 385 participants utilized the STAR tool on 155,605 acres over 2,276 fields, more than doubling its use in Illinois compared to 2019. Statewide, more than 70 Soil & Water Conservation Districts now administer the program.

“The Illinois Department of Agriculture commends STAR on a year of growth,” said Illinois Department of Agriculture Director Jerry Costello II. “STAR is a prime example of how a tool developed by Illinois farmers can encourage improvements in on-farm soil health and downstream water quality. We look forward to working with the STAR initiative to further cultivate conservation on Illinois farms.”

National Farm Safety and Health Week, initiated by the National Safety Council, has been proclaimed by each sitting U.S. President since Franklin D. Roosevelt in 1944.