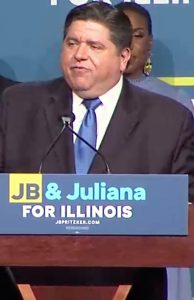 Governor-elect JB Pritzker was congratulated following his victory in the Nov. 6 election by Illinois Farm Bureau President Richard Guebert Jr. The IFB is offering their guidance in helping the new governor transition into his role regarding agricultural issues. (Blueroomstream.com)

The week in agriculture is led by last week’s election of billionaire Democrat JB Pritzker to govern the state of Illinois; we have state farm bureau reaction. Also this week, we have the second part of our interview with IFCA’s Jean Payne on the EPA’s dicamba usage extension. In addition, we have news of an upcoming water quality webinar and some winter farm conference dates to share. Please read on …

“On behalf of members of the Illinois Farm Bureau, I would like to congratulate JB Pritzker on his election as the 43rd Governor of Illinois,” said Rich Guebert Jr., IFB president, in a statement issued the evening of the election. “We look forward to building a strong relationship with Governor-elect Pritzker and his team, so we can work together to ensure the growth of Illinois agriculture, a cornerstone of our state’s economy.”

Guebert extended the farm bureau’s assistance and knowledge of the state’s number one industry — agriculture — to the new governor as he selects his transition team and advisers.

“In the coming weeks, we know that Governor-elect Pritzker and his team will be putting the numerous pieces in place that will make up his administration. The IFB stands ready to be a source of expertise and information for the new gubernatorial administration when it comes to issues impacting farmers and agriculture,” Guebert said.

BLOOMINGTON — The U.S. EPA’s recent decision to extend for two years the registration for the controversial herbicide dicamba was met with enthusiasm from many farmers in the state, particularly those who plant genetically modified soybeans (translation: most, but certainly not all). There will be new labels and regulations for the weed killer, including a strict 45-day limit on spray applications after planting and new standards for who can legally apply the product. The decision comes after an initial trial period of two years in Illinois, during which more than 550 complaints alleging crop damage or loss from off-target applications of dicamba were received from non-GM farmers and specialty growers by the Illinois Department of Agriculture.

“Being the nation’s largest soybean producing state, we have a huge responsibility to try to keep this product on target,” said Jean Payne, director of the Illinois Fertilizer and Chemical Association (IFCA), in a phone interview. “Probably 70 percent of all GMO soybeans are going to be dicamba tolerant, and the truth is that if you don’t provide a legal mechanism for application, then you are left with nothing but desperate measures. This would be worse than providing a legal avenue to apply this product.”

The product, manufactured and sold by BASF, DuPont and Monsanto, is technologically sound, according to Payne. Learning how to manage dicamba more efficiently is the task before soybean producers in 2019, she said. “Training is good, but Mother Nature throws a lot of curveballs in the springtime, and that’s when it is difficult to control,” said Payne. “We have never had a herbicide that has resulted in this much off-target movement, and this much anxiety in the applicator community. (But) our eggs are in that basket.”

IFCA is gearing up for another year of dicamba applicator training and testing; see the organization’s website (www.ifca.com) for dates and locations. “It is going to be a very busy winter of training preparation and delivery,” said Payne.

2019 corn and soybean returns for Illinois farmers are projected at negative $81 per acre, compared to a positive $56 per-acre return in 2018. (U of I farmdoc)

‘Stormwater 101’ topic of U of I webinar

URBANA — How to address local flooding and water quality issues will be the topic of a University of Illinois Extension free webinar, “Stormwater 101,” at noon on Dec. 6 at. The webinar will address best management practices for addressing urban stormwater quality and quantity challenges, along with the fiscal implications of stormwater solutions. Amy Ando, a U of I professor and water specialist who has done extensive research to improve aquatic habitat through stormwater management, and Eliana Brown, outreach specialist with the Illinois Water Resource Center, will present the webinar.

Ando has performed research for the USDA and U.S. EPA on water quality. Brown works with communities to educate people on stormwater pollution and best management practices, and leads the IWRC’s role in the implementation of the Illinois Nutrient Loss Reduction Strategy. While the webinar is free of charge, registration is required either online (https://web.extension.illinois.edu/lge/) or via email (lmorrisn@illinois.edu), where more information about the webinar is available.

ISA released dates for their annual Soybean Summit and Better Beans series. The ILSoyAdvisor Soybean Summit will be held Feb. 5 at the Crowne Plaza Springfield; it features the latest technologies and management techniques farmers can use to reach full yield potential and maximize profitability. Registration will open around the end of November.