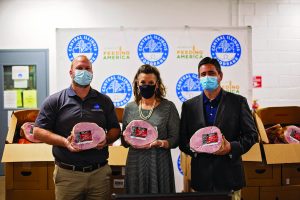 In this week’s Thanksgiving edition of your home for Illinois farm and rural news, we have information on why some turkeys cost more at the grocery store this year. Also: the Illinois Pork Producers are saying there’s no gift like ham for the holidays and are offering information on how you can give a needy Illinois family the gift of ham. For these savory news bites and more, please read on …

IPPA: Ham is a gift to be shared at holidays

SPRINGFIELD — The Illinois Pork Producers Association is participating in the National Pork Producers Council’s “Give-a-Ham” challenge, an annual social media campaign that encourages people across the country to donate pork to organizations serving the food insecure. Alan Kollmann, IPPA board president, recently presented 500 hams to the Central Illinois Foodbank on behalf of Illinois pig farmers and the Pork Checkoff to kick off the event in the Prairie State.

“Giving a ham is a symbol of generosity and compassion, which is especially valuable during the holiday season,” said Kollmann. “As pig farmers, we always have the end user in mind when raising our animals and creating quality pork products. We enjoy sharing those products whenever we can to get extra protein to those in need.”

Jerry Costello II, Illinois Agriculture Director, joined Kollmann in support of the pork industry’s commitment in giving back to their communities. Costello encouraged his fellow colleagues to participate in Give-A-Ham, even extending the challenge to Missouri Director of Agriculture, Chris Chinn. Costello invited Chinn to purchase a ham product of her choice and donate it to an organization of her choice.

According to an IPPA news release, anyone can take part in the challenge by gifting a ham this holiday season. Likely recipients include local food pantries, emergency personnel, organizations that are special to you and families in need. To help IPPA spread awareness of the campaign, which is a part of IPPA’s Pork Power donation program, participants are invited to post about their donations to Illinois Pork Producers on social media with the tag #GiveAHam. (IPPA news)

SPRINGFIELD — With the Illinois harvest at the finish line, many farmers are turning to fall field work to fill the shortened days. According to the November 15 USDA-National Agricultural Statistics Service Illinois Crop Progress and Condition report, there were 4.6 days suitable for field work during the week ending Nov. 14. Statewide, the average temperature was 46.3 degrees, 3.9 degrees above normal. Precipitation averaged 0.45 inches, 0.32 inches below normal.

Though more time remains in the reporting period, monthly numbers are trending downward, the Illinois Farm Bureau news service reported. In 2020, 1.7 million pounds were harvested with 1.35 million in cold storage, while in 2019 there were 2.3 million pounds harvested and 1.8 million pounds frozen.

Increased demand at the holiday, increased input prices and a reduced workforce are the primary drivers behind the higher prices, noted Christine Yordy, co-owner of Yoder Turkey Farm in Morton (Tazewell County). “It’s all three,” she said. “We personally have less cost with transportation but have absolutely seen the increases in labor and feed prices.”

The American Farm Bureau Federation announced last week that the average price of a full Thanksgiving dinner in the U.S. had risen by 14 percent from 2020, with turkey prices increasing by 24 percent. (IFB news)

URBANA — As the price for regular unleaded gasoline remains near the $3.50-per-gallon mark, the demand for ethanol across the U.S. is nearing an all-time high. This is according to University of Illinois “farmdoc” social media manager Keith Good, who cited Wall Street Journal reporter Kirk Maltais’ report in his weekly Farm Policy update for the U of I:

“Prices for ethanol, the corn-based fuel that is a common additive to gasoline, have risen about 50 percent year to date, with the near-term contract trading at about $2.20 a gallon on the Chicago Board of Trade. The price pushed through $2 a gallon earlier this year, the first time since 2014 it has done so. August traffic on the streets was up 8 percent from last year, according to the U.S. Federal Highway Administration,” Maltais wrote. “Gasoline prices are the highest they have been in seven years, hitting an average of $3.41 per gallon as of Nov. 8, according to data from the U.S. Energy Information Administration. The $1.31 increase from a year earlier has boosted profits for ethanol producers.”

The Journal article continued: “In the short term, corn prices are moving higher — with ethanol refineries hungry to consume what farmers harvest. Spot prices, the amount paid by those buying corn from farmers, are up in many Midwest locations and are at a premium to futures prices, according to data from StoneX Group.”

This, of course, is great holiday season news for Illinois and Midwest corn farmers who have seen multiple years of declining demand for corn ethanol.

From my family to yours, wishing all of the readers of this column and newspaper, and your families, a wonderful and peaceful Thanksgiving and holiday season!