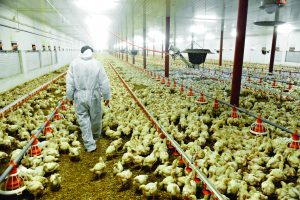 Important news out of Springfield last week included a warning for poultry producers to monitor their flocks for signs of avian influenza, which has been detected in birds in Indiana, Kentucky and elsewhere in February. We also have the date and details for the Illinois corn checkoff referendum to be held at county Extension offices in March, along with updates on the value of Illinois corn as a domestic and export commodity. Please read on…

SPRINGFIELD – Though officials have emailed or otherwise contacted every large and small poultry processor they have recorded in their database, the Illinois Department of Agriculture is asking media to help spread the word to producers: highly pathogenic avian influenza is knocking on our state’s door. Following confirmed outbreaks in commercial poultry facilities in Indiana and Kentucky, along with a “backyard” flock in Virginia, Illinois State Veterinarian Mark Ernst issued the following statement:

“As the state veterinarian and the official state agency of the NPIP (National Poultry Improvement Plan), I strongly encourage all producers to move all birds indoors to prevent contact with wild birds or their droppings. This will help you do your part to protect the health of your birds and the industry. Additionally, I encourage you to review your biosecurity plan and implement the highest level of security possible. You need to ensure that feed and water cannot be contaminated by wild birds. Please report any increase in mortality or abnormal clinical signs to our office or the USDA immediately. It has been noticed that a significant decrease in water consumption has been an early indicator in the affected flocks, so we encourage you to monitor this as well.”

In addition to the outbreaks in Indiana and Kentucky, positive cases of avian influenza have been recently reported in South Carolina and New York, according to news sources. The last prior confirmed outbreak of avian influenza in the U.S. occurred in 2020. In 2016, around 400,000 birds were depopulated in southern Indiana due to an outbreak.

SPRINGFIELD – Illinois corn farmers will have a chance to approve or disapprove a proposal to raise the Illinois corn checkoff rate– which is a percentage they pay for each bushel of corn sold at an Illinois grain elevator– on March 29. According to Krista Lisser of the Illinois Department of Agriculture, the referendum proposes raising the corn checkoff rate from 5/8 of a cent to 7/8 of a cent per bushel. The proposal will be approved if a simple majority of those voting in the referendum vote in favor of the amendment. Polling is to take place at the local Extension offices during normal business hours, though Extension offices in Brown, Pike, Bond, Henderson, and Menard County will be closed, and Grundy County will have reduced hours from 12-4.

Eligible voters who reside outside the State of Illinois or who cannot be physically present at the polls on March 29 may cast an absentee ballot. Absentee ballots must be requested in writing from the Illinois Department of Agriculture. Requests should be sent to: Director, Illinois Department of Agriculture, Attn: Bureau of Marketing and Promotion, State Fairgrounds, P.O. Box 19281, Springfield, IL. 62794-9281. (Illinois e-News release)

WASHINGTON, D.C. – With corn-based ethanol under attack due to a recent report questioning its viability as a carbon emission-reducing “green” fuel, Senator Tammy Duckworth (D-Ill.) coordinated with Senators Jodi Ernst (R-Iowa) and Debbie Stabenow (D-Mich.) to set the record straight on the benefits of corn-based ethanol. According to the Illinois Corn Growers Association, Duckworth asked very important questions of Emily Skor, Growth Energy, during last week’s U.S. Senate Committee on Environment and Public Works hearing. This allowed Skor’s answers to be entered into the record regarding the cost saving benefits of corn-based ethanol.

“What’s really important to understand is the role of biofuel in bringing down the price of oil for consumers. Most assuredly, biofuels like ethanol help bring down the cost of gas prices,” said Skor in answer to Senator Duckworth’s questioning.

Duckworth asked to enter into the record EPA analysis from 2015, 2017 and 2021 which confirm the fact that corn-based ethanol lowers fuel prices for consumers, along with studies that explain the USDA’s finding that corn-based ethanol’s carbon intensity is 39% lower than gasoline and that corn is not causing land use change. The studies also address the recent claims of an overuse of fertilizer, Duckworth noted.

BLOOMINGTON – According to Illinois Corn communications director Lindsay Mitchell, final calendar year 2021 trade data published by the Department of Commerce earlier this month shows that the American agricultural industry reached its highest annual export value ever recorded in history. In a report posted to the Illinois Corn website, Mitchell noted the following:

The Illinois corn checkoff program was established in 1982 to promote the utility of corn as a domestic and exported commodity. (Ill. Corn Marketing Board)