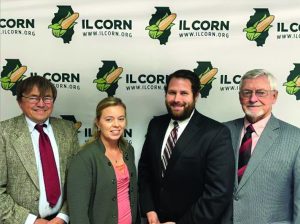 This week’s column is entirely devoted to news from the Illinois Corn Growers Association annual meeting and elections, held Nov. 22 in Bloomington. Please read on …

BLOOMINGTON — The Illinois Corn Growers Association elected Matt Rush, a farmer from Fairfield, as president for 2022-23, during their annual meeting at the Asmark Agri-Center. Rush succeeds Marty Marr, a farmer from New Berlin.

According to an ICGA news release, Rush has served on the ICGA board for six years, most recently as vice president. He will continue his role as District 13 director for the duration of his term as president, serving members in Clay, Edwards, Jefferson, Lawrence, Marion, Richland, Wabash, Wayne, and White counties. Joining Rush in leadership roles are Vice President Dave Rylander of Victoria, Treasurer Sarah Hastings of Sidney and Secretary Joe Murphy of Harrisburg.

Re-elected to their positions as directors are Mark Bunselmeyer of Maroa, and Rush. Re-elected at-large directors include Kate Danner of Aledo and Dave Rylander of Victoria.

Congratulations to Matt and all the new leaders!  (ICGA news)

BLOOMINGTON — For her work to increase the usage of corn-based ethanol, Sen. Tammy Duckworth received the Ethanol Award from the Illinois Corn Growers Association at the group’s annual meeting on Nov. 22 in Bloomington.

Duckworth co-sponsored the introduction of Illinois Rep. Cheri Bustos’ Next Generation Fuels Act in the U.S. Senate in August of this year. The bill would build ethanol demand and pave the way for corn-based ethanol to play an important role in America’s clean energy future, according to the ICGA.

“Senator Duckworth has always been an ardent supporter of biofuels, particularly corn-based ethanol. As a veteran, she is interested in policies that promote national security, and using domestically grown fuel instead of importing petroleum and fighting wars to maintain access to petroleum is important to her,” said Marty Marr, 2021-22 ICGA President and farmer from New Berlin. “We are so grateful for her leadership on this bill that will impact farmers for 2-3 generations once we get it passed.”

BLOOMINGTON — Mark Lambert, a longtime communications coordinator for the Illinois Corn Growers Association and the American Farm Bureau Federation, is the recipient of ICGA’s top award — the World of Corn Award. Lambert, now retired, was given the award at the ICGA Annual Meeting last week in Bloomington. The World of Corn Award goes to individuals, organizations, or businesses who make significant contributions to the corn industry. Now in its 33rd year, the award was created to recognize the global importance of corn, while honoring individuals who have helped Illinois become a leader in the corn industry.

“Mark Lambert has a long history of service to American corn farmers, Illinois corn farmers specifically,” said Marty Marr, family farmer and 2021-22 ICGA President. “He has led the personal and professional development of so many farmer leaders, told our story when we couldn’t, and represented us well since the 1980s.”

According to his bio, Lambert began his career writing for the Peoria Journal Star and was part of the team to launch Illinois AgriNews. He came to Illinois Corn as the communications director in 1988 and served in that capacity for 21 years, afterwards moving to serve the National Corn Growers Association as a Senior Communications Manager for 10 years. He totals four decades in communications and journalism, telling the story of agriculture and helping family farmers find a voice.

On a personal note, Mark helped this reporter find his voice in the ag media industry as an early mentor and adviser. His assistance and encouragement helped me to break down perceived barriers, go to the source, and report with confidence and accuracy. Thank you and congratulations Mark!

BLOOMINGTON — Also during their annual meeting, the ICGA recognized Richard “Dick” Lyons for his commitment to on-farm conservation with the Mike Plumer Conservation Award. The former agriculture instructor at LincolnLand Community College and Illinois State University grows corn and soybeans in Montgomery County, while using a two-year rotation of cereal rye and tillage radish, barley, rape, and Austrian winter pea to serve as cover crops during the winter.

Lyons was recognized for his belief in utilizing soil health practices on his farm like cover crops and minimum tillage, in addition to filter strips, two-stage ditch designs and streambank stabilization to manage his fertilizer.

The Illinois Corn Growers Association is a state-based organization that represents the interests of corn farmers in Illinois, maintaining a high profile on issues in Washington D.C. and Springfield.