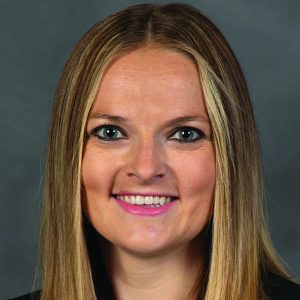 Megan Dwyer, director of conservation programs for the Illinois Corn Growers Association, lobbied last week for common-sense adjustments to the proposed Waters of the U.S. rule by the USEPA. (Illinois Corn photo)

In this week’s peek between the rows we have news about planting progress, corn and soybean futures, the latest on WOTUS and a plea for more agricultural educators in the state of Illinois. Please plow ahead for more …

The good news comes as corn and soybean prices for 2022 fall delivery are at high levels. During the first two weeks in May, fall delivery bids in central Illinois averaged $7.39 per bushel for corn and $14.52 for soybeans, according to a farmdocDAILY report published last week by University of Illinois and Ohio State University farm economists Gary Schnitkey, Krista Swanson, Carl Zulauf and Nick Paulson, “Potential 2022 Fall Prices for Corn and Soybeans Based on History.”

BLOOMINGTON — A growing staff requires additional space, which is why the Illinois Soybean Association will relocate this fall to a new building located at 1108 Trinity Lane, Bloomington. ISA communications director Claire Weinzierl told RFD News & Views that the new building will encompass 25,168 square feet (including tenant space) and feature amenities such as a full kitchen, laundry, and an outdoor patio with covered seating and grilling area.

According to a news release, ISA’s Chicago office is also undergoing a move from its original location downtown to a more user-friendly location in Lombard, to better serve the Chicago legislative districts and urban partners.

BLOOMINGTON — With 99 vacancies for agricultural education teachers in Illinois schools and record numbers (23,000) of kids signing up for FFA, the call is out for new and veteran educators to fill the learning gap.

According to Dean Dittmar, Facilitating Coordination in Agricultural Education coordinator, the high number of teacher vacancies can be linked to several factors, including pandemic impacts on teaching, schools expanding existing programs and districts opening and restarting others. Dittmar told FarmWeekNOW.com’s Kay Shipman that 23 ag teachers are leaving the teaching profession and nine are retiring. Out of the 99 vacancies, however, 73 have been filled — but many of the new hires involve districts hiring ag teachers away from other schools, which Dittmar said creates another vacancy.

He told Shipman he was worried about more openings surfacing given the record number and the school year barely ending. “It’s early. We still have June, July and August to go,” he said.

Dittmar called on individuals with agriculture experience to consider obtaining an educator license with stipulations, formerly known as a provisional license.

According to the report, qualified applicants need 60 semester hours after high school in any subject, but also need 2,000 hours of paid work experience in agriculture. That experience could include working on a family farm, at an agribusiness, in a horticulture operation or in any other agriculture enterprise.

BLOOMINGTON — The Biden administration U.S. Environmental Protection Agency released a proposed rule last November to re-establish the pre-2015 definition of “Waters of the United States,” often referred to as WOTUS. The proposed rule removes the Navigable Waters Protection Rule, eliminating what Illinois Corn describes as “the long-overdue certainty and clarity” for farmers affected by the scope of WOTUS jurisdiction.

A recent roundtable hosted by the U.S. Army Corps of Engineers — one of 10 scheduled hearings — was attended by Illinois Corn’s Megan Dwyer, director of conservation and stewardship, who reported the following: “Farmers and ag groups have embraced the need to tackle challenges around conservation and are more than ready to continue our efforts,” she said. “I asked the EPA to work collaboratively with farmers to address actual, real on the ground needs as a practical and realistic alternative to … getting in the way of farmers’ efforts. We need problem-solving partners to work with us to address any water quality concerns. There was a diverse group of voices on the call to give the EPA many perspectives to consider. At the end of the conversation, the EPA noted the various innovative ideas and appreciated the robust dialogue.”

Dwyer and others invited to the panel were allowed four minutes apiece to introduce themselves and offer evidence as to how the proposed rule affects their industries. More roundtables are scheduled in other states and can be viewed through the Illinois Corn website (www.ilcorn.org).

Despite the challenging weather conditions this spring, the Southern Illinois Wheat Tour projected an average yield of 68.56 bushels per acre based on samples taken from 63 fields. (Illinois Farm Bureau)