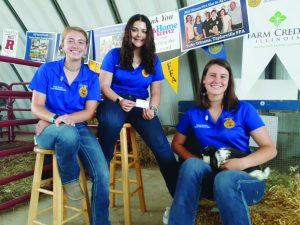 SPRINGFIELD — Let’s start our ISF Ag Day roundup with one of the final events of the day: the highly anticipated Sale of Champions. After a spirited bidding war, Illinois Gov. J.B. Pritzker was edged out in the bidding for grand champion steer by none other than his wife, Illinois First Lady M.K. Pritzker. She offered a record bid of $105,000 for the steer, which was exhibited by Landry Freeman of Scott County.

The annual IDOA breakfast on the director’s lawn attracted hundreds of farmers and farm commodity group leaders to the state fair on Agriculture Day. During his remarks at the gathering, Pritzker promised to sign two ag-related bills into law later in the day.

True to his word, Pritzker approved House Bill 3218 and Senate Bill 1624, companion bills that add agricultural sciences as a course option for the elective category as part of required high school coursework for college admission. The measure was supported by teachers, FFA chapters, students and lawmakers concerned with Illinois carrying on its proud agricultural tradition.

“The study of agriculture is vitally important, and our curricula should reflect that,” said State Sen. Elgie Sims, D-Chicago. “Its exclusion as an option of course study for admission did students who plan to one day work in the field a huge disservice. There a wide variety of subjects taught in agriculture, whether it be math, economics, biochemistry and more. I’m proud of the work done to expand studying options as every course should be considered equal for our students and their studies.”

Many people know that the discovery of penicillin was made in the USDA “Ag Lab” in Peoria during World War II — but even more don’t. This milestone discovery was celebrated with Pritzker signing House Bill 1879, which designates penicillium rubens as the official state microbe of Illinois. The designation also celebrates Mary K. Hunt, the Peoria woman who brought a moldy cantaloupe to the Northern Regional Research Library — now known as the National Center for Agricultural Utilization Research — which led to the discovery of penicillin.

“By making penicillium rubens our state microbe, we commemorate the contribution that Peoria made to worldwide health and medicine,” said State Sen. David Koehler (D-Peoria). “Nearly a century ago, our National Agriculture Utilization Laboratory discovered a microbe that has been saving lives from disease since — a historic feat worth recognizing and remembering.”

Recipients of Farm Credit Illinois’ 2021 Fresh Roots Director’s Cup awards were honored during Ag Day at the ISF. The award celebrates farmers up to age 40 or who are in their first decade of farming who commit to a brighter future for their farm family business and community. Director’s Cup Award winners for 2021 were Austin Ellison of Belleville (St. Clair County), Mitchell Hinds of Kenney (Macon County), Lydia and Adam Holste of Altamont (Effingham County), Jacob Strohbeck of Alton (Madison County), Elliott Uphoff of Shelbyville (Shelby County) and Michael Yoder of Hammond (Moultrie County). Each Freshroots Director’s Cup recipient receives a $5,000 cash award from Farm Credit Illinois.

Congratulations to all of the Ag Day award recipients!

Over 350 Illinois farms were verbally acknowledged and celebrated as “centennial farms” by IDOA Director Jerry Costello II during the annual Ag Breakfast at the Illinois State Fair.