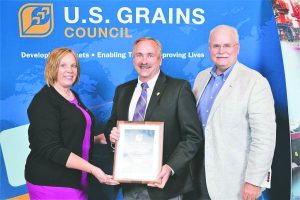 Rodney Weinzierl (center), an Illinois farmer from Stanford, was honored by the U.S. Grains Council for 30 years of leadership service to the agricultural industry. (USGC/Illinois Corn photo)

In this week’s farm and rural news corral, we recap a wild week of plunging and surging soybean prices apparently sparked by rumor, innuendo and government shutdown. What happened? Also this week: research scientists are making progress in finding solutions for soybean cyst nematode resistance, and an Illinois farmer-leader was honored at the recent annual U.S. Grains Council meeting, among other happenings. Please read on…

CHICAGO — Soybean prices have traveled a slippery slope in recent days, “exploding,” as one market analyst observed, on Jan. 17 after a series of ups and downs in days previous. During the Top Producer Summit in Chicago, analyst Jerry Gulke and colleagues had issued generally grim forecasts for soybean prices before things turned around that morning. Soybean prices jumped higher, taking corn and wheat with it, according to a Farm Journal report.

“I guess exploded to me means we’re up a dime or so,” said Gulke, president of The Gulke Group, with tongue apparently firmly in cheek. Farm Journal correspondent Jo Windmann observed that with rumors about Brazil’s weather and China’s tariffs circulating, along with a lack of crop supply data due to the current federal government shutdown, it’s hard to tell if Thursday’s price spike should be credited to the rumor mill or to continued volatility. According to Gulke, the U.S. is still sitting on too many beans and Mother Nature will be the ultimate price determinant.

During the week prior to the Top Producer Summit, soybean prices had risen and fallen on the same issues, reported University of Illinois agricultural economist Todd Hubbs. “Considerable uncertainty surrounds both of these matters and is set to continue as we move into 2019,” Hubbs opined on the Jan. 15. “The development of soybean prices over the next year depends on how both of these issues get resolved.”

Dry conditions in Brazil contributed heavily to the recent rally in soybean prices, Hubbs continued, following numerous projections of a drastically lower harvest production total. However, January projections released by the Brazilian agricultural statistics agency projected a harvest of 4.36 billion bushels, higher than market observers had predicted. This sent prices tumbling again. The lack of U.S. crop statistic reports normally issued by the USDA has exacerbated the turbulent soybean market, causing many analysts to warn of a possible market upheaval if there are surprises in production and reserve numbers once U.S. data is compiled and government reports are finally issued.(AGWeb, U of I ACES news)

SCN resistance advanced at U of I

WAUKESHA, WI. — Research scientists funded by the soybean checkoff, including scientists at the University of Illinois, are developing new sources of genetic resistance and new soybean cyst nematode resistance management strategies. This is according to the SCN Coalition, which issued a news release on Jan. 15 detailing how university researchers are discovering, stacking and testing new resistance genes.

The researchers include Brian Deers, a U of I plant breeder whose team has identified two new resistance genes from wild soybean (Glycine soja) that have proven very effective when bred into commercial soybean (Glycine max) varieties. When stacked with another resistance gene from PI 567516C, along with the major gene Rhg 1 from PI 88788, the new genes create a four-gene stack.

“We found that by combining genes from different resistance sources we could obtain much higher levels of resistance compared to using one source,” Deers said. The new gene combinations are currently being tested in greenhouse trials at the University of Missouri Bond Life Sciences Center. When the four-gene stack is rotated with the Peking source of resistance — which is currently used in just 5 percent of commercial soybean varieties — scientists have documented a slowing of SCN populations adapted to PI 88788 over generations, they say.

USDA-NRCS uses the Earth Team volunteer program in Illinois — and in all 50 states — to use the time, skills and passion of local people to do work that protects and enhances soil, water and other natural resources. (Illinois NRCS)

DENVER, CO. — Illinois Corn executive director Rodney Weinzierl was recognized for 30 years of service to the agricultural community during the U.S Grains Council 58th annual membership meeting in Denver earlier this month. While serving in leadership roles with Illinois Corn, Weinzierl has worked with USGC to communicate with worldwide grain customers to promote long-term relationships and expanded markets for U.S. grain.

“For being a farm kid in central Illinois, I did not think the world was near as big as it is,” Weinzierl reflected, upon receiving the USGC acknowledgement. “Working for Illinois Corn and partnering with the Council has really expanded my view, and that is what I have tried to pass onto others — just how big the world is and the opportunities we have even though we are a thousand miles from any coast. I would have dreamed about it but I never would have had that experience had the Council not existed.”

Weinzierl is a graduate of Illinois State University in Bloomington who farms in Stanford..

“Thanks are due to the volunteer and to our NRCS team who found her and put her time and skills to valuable tasks and local work that truly impacts NRCS customers and the natural resources we protect,” Dozier stated. District conservationist for the group, Gary Zwilling, noted that Billington helped in the office and tackled the tough job of completing important paperwork and government contract forms, freeing up NRCs staff and local soil and water district staff to focus on a heavy CRP workload. (Illinois NRCS news)