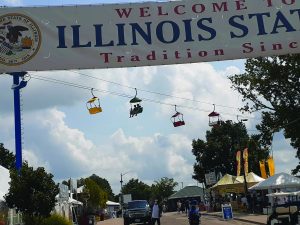 Total revenue for the 2021 Illinois State Fair was estimated at more than $5 million, while attendance was second-best since 2014. (Photo by Tim Alexander)

This week in agriculture we have reports on a soy-based dust deterrent trial at county elevators, Illinois State Fair attendance and revenue numbers, county row crop production estimates and more — please read on!

Got dust? Try this solution

BLOOMINGTON — Cutting down on dust created by farmers doing the business of farming has been a topic of discussion — sometimes heated discussion — for many years. A pilot project funded by the Illinois Soybean Association taking place at select grain elevators may provide a solution for co-ops and larger operations. Designed for usage on unpaved gravel roads, farm fields and roads, orchards, vineyards and mining roads, BioBlend’s EPIC EL (EsterLink) dust suppressant is described as a soy-based natural ester dust control product currently being tested at grain elevators in Chenoa, Meadows, Eureka, Milledgeville and Stanford.

“ISA was proud to partner with BioBlend and the Grain and Feed Association of Illinois to conduct the pilot project this harvest season,” says Mike Levin, ISA Senior Director of Government Affairs. “We are pleased that BioBlend could be tested as an effective solution against challenges with dust at elevators this fall, and hope that others will stay tuned for the results of the pilot project and try it out for themselves.”

SPRINGFIELD — With combines rolling all across Illinois, much thought is being given to county yield numbers, which are used to determine rates for an array of farm bill programs. 2020 top Illinois corn-yielding counties included Menard (216.3 bushels per acre), Peoria (214.7) and Stark (212.4). Top soybean yields were reported in Piatt (70.5), Logan (67.6) and Sangamon (67.6) counties. To determine 2021 numbers, USDA’s National Agricultural Statistics Service is currently surveying producers in 38 states, including Illinois.

Loan rates, disaster payments, crop insurance price elections and other programs are guided by the data farmers will provide in the coming weeks, noted Illinois State Statistician Mark Schleusener. “Without data, agencies such as USDA’s Risk Management Agency or Farm Service Agency may not have enough information on which to base their programs,” he said. (USDA-NASS)

“The AFA component of RCPP is designed for partners who are thinking outside of the box to address some of our most pressing natural resource challenges,” said Ivan Dozier, Illinois State Conservationist for NRCS. “RCPP is a testament to the power of partnership. By combining local expertise, partner resources, federal assistance and a shared commitment to conservation we can advance critical priorities and innovative solutions that are key to addressing climate issues.”

“It’s so great to get the students, family and administration involved in recognizing their new ag teacher,” said Susan Moore, Director, IAA Foundation. “It’s just one more way to reinforce that the ag community stands behind our educators.”

Each teacher’s school carried out surprise announcements acknowledging the teachers’ efforts in securing the grants. The Illinois Farm Bureau provided seed money to begin the program, which aims to fund 32 educators with up to $10,000 in personal income over a 12-year timeframe. It was created to address a severe shortage of ag education teachers in Illinois. (IAA news)

SPRINGFIELD — Attendance at the annual Illinois State Fair was the second-highest since 2014, when the Illinois Department of Agriculture was put in charge of tracking the crowds. With more than 472,000 visitors, the 2021 fair in Springfield was surpassed only by the record-setting crowd of 2019. It didn’t appear that crowds were spending as much this year, however, with total revenue (just over $5 million) ranking just ninth over the past two decades, according to an Illinois e-News release.

“We were happy to be able to hold the 2021 Illinois State Fair after it was canceled in 2020 and now seeing how many people came out to enjoy it with us is really special,” said Illinois State Fair Manager Kevin Gordon.  “I think being able to overcome the challenges brought on by the pandemic and safely bring back so many families to the fairgrounds is a great accomplishment.”

Of the estimated $5 million in total revenue generated by the Illinois State Fair in 2012, more than $1.5 million was from grandstand revenue. (IDOA)