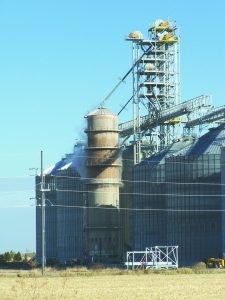 Due to high moisture levels, corn and soybeans are being “cooked” (dried) at nearly every capable elevator facility in central Illinois this harvest season. The Grainland Cooperative elevator (pictured) at Eureka (Woodford County) was no exception. (Photo by Tim Alexander photo)

In this week’s R.F.D. News & Views, we have information about an upcoming soybean trade mission to Taiwan, a scheduled hemp growers’ summit with the Illinois Department of Agriculture, and the next announced phase of Illinois State Fairgrounds updates. Also: advice on why farmers should “leave the stubble” this November … please read on:

BLOOMINGTON — Soybean farmers from the Illinois Soybean Association will travel to Taipei, Taiwan this week to participate in the Taiwan Outlook Conference. The Nov. 14-16 trade mission comes just weeks after Taiwan agriculture officials signed a memorandum of intent to purchase $2.2 billion of Illinois-grown soybeans and corn during marketing years 2020-21.

During the mission, ISA grower-leaders will visit several factories that utilize U.S. soybeans and meet face-to-face with importers to discuss growing partnerships and the advantages of U.S. soy. The U.S. soy industry and Taiwan have a half-century long track record of actively investing and partnering in programs that support each other’s industries, according to an ISA media release.

SPRINGFIELD — Last week, USDA released its rules and parameters for hemp production, which was approved nationwide as part of the 2018 Farm Bill. Following the USDA’s lead, the Illinois Department of Agriculture announced it will host the first Illinois Hemp Summit on Dec. 17 at the Orr Building on the Illinois State Fairgrounds.

“We’ve heard from the hemp farming community and understand their concerns related to the USDA rules,” said Jeff Cox, IDOA bureau chief for its medicinal plants department. “The summit will provide a great opportunity to provide an in-depth presentation on the USDA’s rules and the implications for Illinois’ emerging hemp industry.”

Grower, processor and university research panels have been assembled to share different perspectives on the industry. The panels will share contributions, lessons learned and visions for the future of the Illinois hemp industry, according to Cox. Tickets for the summit are $25; registration is available online at the IDOA website on a first-come, first-served basis. (Illinois e-News)

SPRINGFIELD — On the topic of the Illinois State Fairgrounds, the next phase of road improvements has begun with the Illinois Department of Transportation paving several main arteries. This is the beginning of a $3 million, multi-year and multi-agency road improvement project for the fairgrounds funded by the Capital Development Board.

“Over the years the heavy traffic and volume and the weight of the trucks and trailers delivering livestock have worn out these roads,” said John Sullivan, director of the Illinois Department of Agriculture. “These multi-agency cooperative agreements allow for this and other fairground improvements — which could not have happened without the efforts of Governor (J.B.) Pritzker, the (Illinois) General Assembly and the passage of the Capital Bill.”

The current phase of fairgrounds road improvements is expected to wrap up around Thanksgiving. Phase two will begin next spring, according to an Illinois e-News release.

“Keep the Stubble” in No-Till November

CHAMPAIGN — “No-Till November” is here, and the Illinois Natural Resources Conservation Service is once again encouraging Illinois farmers to “Keep the Stubble” on their harvested crop fields to improve soil health. The effort, loosely patterned on the national cancer awareness “No Shave” November campaign, encourages farmers to keep their tillage equipment inside their sheds this fall.

“No-till farming is a cornerstone soil health conservation practice, which also promotes water quality while saving farmers time and money,” said Ivan Dozier, Illinois NRCS State Conservationist. “The most basic principle of soil health is ‘do not disturb.’ This campaign is a fun way to remind farmers about the important relationship between tillage and soil health.”

NRCS Illinois State Soil Scientist Ron Collman likens no-till to feeding the earthworms that help enrich soils. “Earthworms can be an incredible part of ag operations. But they need to be fed. And fed well. Bare and exposed soil without residue and vegetation doesn’t provide what earthworms need. Stop the fall tillage and feed the earthworms,” he advises. (Illinois NRCS news)

SPRINGFIELD — The Illinois Pork Producers Association, along with the Illinois Corn Marketing Board, presented Central Illinois Foodbank in Springfield with 5,500 pounds of ground pork on Nov. 12. The gift was part of a larger donation from the Pork Power: Partnering to Fight Hunger in Illinois campaign, totaling more than 53,000 pounds of pork to be distributed to nine Illinois food banks during November and December.

Tuesday’s donation will provide nearly 30,000 servings of protein to people in Central Illinois Foodbank’s 21-county territory. Since its inception, the program has distributed over 721,000 pounds of pork — enough for some 3.8 million meals — to families throughout Illinois.

In other IPPA news, the pork producers and University of Illinois have announced an application deadline of Dec. 3 for their final PQA Plus adviser training opportunity of 2019. The training is open to veterinarians, extension specialists and agricultural educators with a D.V.M. or B.S. in animal science (or an equivalent combination of education and swine production experience). Applicants must also have at least two years of documented swine production experience to join the program.

The final PQA Plus training date will be from 9 a.m. to 3 p.m. Dec. 6. Those with an interest in the program should contact Mike Borgic through the IPPA. (Illinois Pork news)