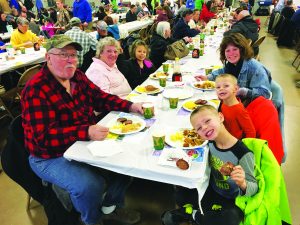 The Peoria County Farm Bureau 2019 Farmers Share of the Food Dollar Breakfast is March 9 at Expo Gardens in Peoria. The cost of this year’s breakfast is 75 cents. (PCFB photo)

This week we have a report from the recent ILSoyAdvisor Better Beans series on why farmers are going to suffer from the lack of Market Facilitation Program payments in 2019, along with updates on the USMCA trade deal, E15 expansion, and more. Please read on …

EAST PEORIA — With no real resolution to ongoing tariff and export wars in sight and lower crop prices, rising input costs and no Market Facilitation Program payments likely in 2019, farmers’ chances for a profitable year are quickly dwindling. This was the observation of University of Illinois farm economist Gary Schnitkey, who told farmers at an ILSoyAdvisor Better Beans series that non-land costs for corn and soybeans — primarily in the form of higher fertilizer costs — may represent the coup de grace for farm operations without cash reserves or a good flow of working capital.

“Increases in non-land costs in 2019 average $25 per acre for corn and $10 per acre for soybeans,” Schnitkey said. “We are projecting $3.60 per bushel corn and $8.50 soybeans this fall. With the (Trump) administration indicating there will be no MFP payments in 2019, producers will again need above-trend yield harvests to avoid losses of up to minus-$60,000 in net farm income with trend yields. This would be the worst income since we have been keeping records.”

Schnitkey offered a breakdown of MFP payments per commodity, noting that payments for soybeans, at $1.65 per bushel, accounted for a good portion of total payments to farmers. Other commodities receiving payments from the government: wheat ($.14 per bushel), corn ($0.10 per bushel), dairy ($.12 per cwt), pork ($8 per head), sorghum ($.86 per bushel) and cotton ($.06 per pound).

BLOOMINGTON — Faced with another year of stagnant prices, higher input costs and no MFP payments, the Illinois Corn Growers Association is calling on farmers to contact the Illinois congressional delegation and urge immediate U.S. ratification of the U.S.-Mexico-Canada trade agreement, also known as NAFTA 2.0. “Congressional ratification of USMCA is the top priority of the ICGA this year,” said association president Ted Mottaz, an Elmwood farmer. “NAFTA paved the way for what has become a vital, foundational trading relationship that underpins corn prices for our members. USMCA improves upon that relationship.”

Mottaz also urged the Trump administration to keep the current NAFTA agreement — which the president had threatened to pull out of before U.S. Agriculture Secretary Sonny Perdue convinced him otherwise in April of 2017 — in place until a new agreement is ratified. “Mexico and Canada account for more than 25 percent of our agricultural trade. Mexico is a top corn market. Canada is a top ethanol market. Illinois corn farmers simply cannot afford to lose a preferred trading relationship with our North American neighbors,” he said. (ICGA news)

BLOOMINGTON — In a busy week for Illinois Corn President Ted Mottaz, the Elmwood farmer also took time to comment on the announced delay in implementation of a new EPA rule that would allow the year-round sale of higher ethanol blends. The news was delivered by U.S. Ag Secretary Sonny Perdue during a U.S. House of Representatives Committee on Agriculture hearing last week. Mottaz expressed frustration that the rule would be delayed as a result of the partial government shutdown that occurred earlier this year.

“We appreciate Secretary Perdue’s communication regarding the delay in EPA completing the E15 RVP parity rule. It’s disappointing that President Trump’s promise is a casualty of the shutdown. We urge EPA to issue no-action letters to retailers so they can have some certainty in offering the fuel,” stated Mottaz in an Illinois Corn news release.

EPA Acting Administrator Andrew Wheeler told news sources he plans to issue the rule by the summer driving season. During his January confirmation hearing, Illinois Senator Tammy Duckworth and other members of the Senate Environment and Public Works Committee questioned Wheeler on how soon the agency would be able to get the E15 rule on the books, and the EPA’s issuance of small refinery exemptions from renewable fuel volume obligations, “Agri-Pulse” reported. For corn farmers who are near-desperate for new or expanded markets, the rule’s issuance couldn’t come soon enough.

Portrait of farm family sent to Peoria board

PEORIA — A rural Peoria County family planning to expand their farm operation has been facing a landslide of criticism from environmental activists and anti-agriculturists in recent weeks. In an unusual, perhaps unprecedented gesture, the Peoria County Farm Bureau has forwarded a profile of the family — complete with photo, family history and specifications of their planned pig barn — to members of the Peoria County board.

“I have four daughters that I am hopeful to provide for with this farm. My oldest daughter, a recent college graduate, will have a promising future with this pig barn,” says Eleanor Basehoar, a fifth-generation farmer whose plan for a 2,480-head swine facility south of Princeville is under attack by Illinois Citizens for Clean Air and Water and the Heart of Illinois chapter of the Sierra Club, which recently circulated a map of the farm’s location to members.

County board members, by the way, currently have no sway over the barn’s construction — it has already gained approval from the Illinois Department of Agriculture. The profile was emailed to board members so that they may have a better-informed conversation with constituents, according to the PCFB. However, a bill sponsored by State Senator David Koehler, SB 1481, would grant county boards binding power to prevent the construction of local confined animal feeding operations, or CAFOs, by amending the Livestock Management Facilities Act. The bill had its first reading on Feb. 13 and is currently assigned to the Senate Ag Committee.