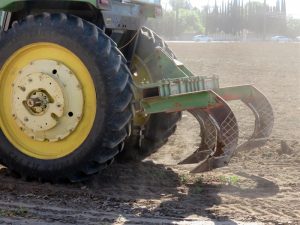 House Bill 3061 comes after the release of a report by the U.S. PIRG that alleges farmers are unable to sufficiently repair tractors purchased from John Deere and other manufacturers because they withhold the software necessary to do so.
(Morguefile.com)

House Bill 3061, introduced as the “Digital Right to Repair Act” in February by Democratic Rep. Michelle Mussman of Schaumburg, would mandate that manufacturers, by 2022, provide farmers with the same diagnostic materials available to official repair providers. It would also require the manufacturers to make parts necessary for repair, including software, available for purchase.

The legislation comes after the release of a report by the U.S. PIRG that alleges farmers are unable to sufficiently repair tractors purchased from John Deere and other manufacturers because they withhold the software necessary to do so.

“The Association of Equipment Manufacturers, of which John Deere is a prominent member, promised that by 2021, they would give farmers the necessary tools to fix their machinery. However, Deere has fallen short of that commitment, so farmers – and all Americans, who rely on them to produce food – are worse off,” U.S. PIRG Education Fund Right to Repair Advocate Kevin O’Reilly said in a release announcing the report.

The report says for countless generations farmers have been able to independently repair equipment once purchased from manufacturers, but new developments in technology have shifted the status quo to disadvantage farmers. Unable to make repairs themselves, farmers are required to take equipment back to the dealership or associated repair facilities, “leading to delays of hours to weeks.”

“Without the software tools needed to diagnose problems, install replacement parts and authorize repairs, the engagement or failure of any sensor or control system forces a farmer to either haul their machine into the nearest dealership or wait for a field technician to arrive to complete the repair,” the report reads.

The report also claims that sensors and controller networks, which have become necessary for tractors and combine harvesters to function, are the highest points of failure on farming machinery as opposed to hardware damage that can be fixed by the farmer.

According to U.S. PIRG, this is intentional to give manufacturers a repair monopoly. Their evidence is the lucrative nature of the repair industry. From 2013 to 2019, John Deere’s annual sales of parts rose to $6.7 billion, a 22 percent increase, while its annual sales of equipment fell by 19 percent to $23.7 billion.

Manufacturers have opposed providing the software on several grounds. They say it could jeopardize proprietary information and lead to the theft of trade secrets tied to programming. Giving farmers access to repair software could also allow them to make illegal modifications to their equipment, potentially leading to some farmers overriding safety and environmental controls placed in the vehicle software.

The Digital Right to Repair Act, which awaits assignment to a substantial committee in the House, includes a provision that prevents the legislation from being made “to require an original equipment manufacturer to divulge a trade secret… except as necessary to provide documentation, parts, and tools on fair and reasonable terms.”

Farming groups have increased their pressure on manufacturers to concede the right to repair, using the threat of legislation to reach an agreement.

According to the Minneapolis Star Tribune, the American Farm Bureau Federation voted in 2020 to throw its weight behind right-to-repair legislation if manufacturers didn’t reach an agreement with farmers and independent repair contractors by 2021.

Alongside Illinois and HB 3061, 20 other states are considering bills mandating the right to repair in their legislatures for a total of 32 bills.