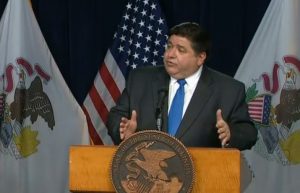 Gov. J.B. Pritzker speaks at a news conference in Chicago Thursday, June 25 one day before the state prepared to enter Phase 4 of reopening from COVID-19-related shutdowns. (Credit: Blueroomstream.com)

SPRINGFIELD — Gov. J.B. Pritzker announced a new tool to track county-by-county progress in the fight against the novel coronavirus Thursday, June 25 but as the state readied to enter the next phase of reopening, he also warned that he would not hesitate to move certain regions backward if progress subsides.

The announcement came as the Illinois Department of Public Health announced 894 new cases of COVID-19 over the previous 24 hours, the most since June 6 when there were 975 reported. But IDPH also announced there were 31,686 more tests completed over the previous 24 hours — the highest single-day total yet — making the positivity rate 2.8 percent for the one-day period.

Over the past seven days, the positivity rate ranged from 2.4 to 2.9, and over the seven days prior to that period, it ranged from 1.8 to 3.1, meaning Thursday’s rate was within the range of average of the past two weeks.

“Obviously, every day I watch the numbers and I think, you know, are we going in the right direction? And I’m rooting for it to go the right direction and we’re making policies that we hope will move it in the right direction,” Pritzker said when asked about the bump in new cases at a Chicago news conference Thursday. “We’re watching. I would wait to make a judgment about whether there’s some direction here that it’s going, but right now I would call it stable.”

Pritzker said the stability has helped move the state toward Phase 4 of reopening Friday, but Illinoisans will need to continue to wash their hands, remain six feet apart from others in public and wear face coverings if they want to keep the numbers low.

In Phase 4, restaurants can open for indoor dining with restrictions, movie theaters can reopen and gatherings of up to 50 are allowed. The state also announced that casinos and video gaming will reopen on Wednesday, July 1, as well.

If COVID-19 numbers do increase, a reversion to previous phases is possible, however.

“I’m not afraid to protect the people of Illinois by moving a region back to an earlier phase if we see a surge,” he said. “Ours will not be one of the states that takes no action in response to a return to the peak.”

Hospitalization metrics remained on a downtrend in Illinois as well, in contrast, Pritzker said, to states like Texas.

As of 11:59 p.m. Wednesday, there were 1,626 total hospital beds in use by COVID-19 patients, 399 of which were intensive care unit beds. Both were slightly up from the day before, but represented the second-lowest numbers since the state began reporting the metrics daily on April 12. There were 216 ventilators in use, the lowest amount in the same span. 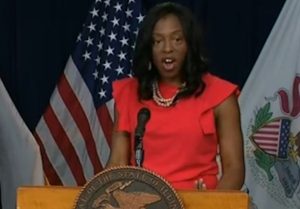 IDPH Director Dr. Ngozi Ezike speaks at a news conference in Chicago Thursday, June 25 one day before the state prepared to enter Phase 4 of reopening from COVID-19-related shutdowns. (Credit: Blueroomstream.com)

“But now I want to tell you that there still is a reality check behind that. The virus has not been eradicated. The virus persists, and we don’t yet have a vaccine or a highly effective treatment that’s widely available,” IDPH Director Dr. Ngozi Ezike said at the news conference. “So although we are seeing fewer and fewer cases, fewer deaths, people are still being infected and people are still losing their lives.”

There were 41 more COVID-19-related deaths reported Thursday, bringing the total since the pandemic began to 6,810, while the total cases grew to 139,434 among more than 1.4 million tested.

The county-level metrics are available at https://www.dph.illinois.gov/countymetrics. The map shows each county, which is blue if metrics remain “on the right track,” according to Ezike, but turns orange if metrics are trending upward.

“And our goal is that with that caution, you will think twice about your own personal habits and activities,” Ezike said. “Maybe you’ll think about reconsidering going out in that large group gathering. Maybe you’ll reconsider going to an indoor dining experience. Maybe you’ll consider appreciating a religious gathering online, as opposed to in person. These county level risk indicators do not necessarily mean that a county moves back. What it means is that if the numbers don’t improve, we could be headed in the wrong direction.”

Pritzker said wearing face coverings is a key protection from the virus and from moving backward economically.

“The virus hasn’t gone away. And when people aren’t wearing face coverings and gathering in large groups and not practicing physical distancing, they’re getting sick, and some are dying,” he said. “And I mean people of all ages – senior citizens, those who are in their 40s and 50s and 60s with pre-existing conditions, and yes, even young and perfectly healthy people have lost their lives to this terrible new disease that we still know so little about.”

Pritzker also announced the state launched 12 mobile community testing teams that will move throughout the state to “mitigate and suppress emerging outbreaks, including places like meatpacking plants, nursing homes, or other traceable gatherings.”

The state has also increased its number of contact tracers by 20 percent since June 1 and has more than 550 active, the governor said. Another 250 tracers will join them “in the coming weeks,” he added.