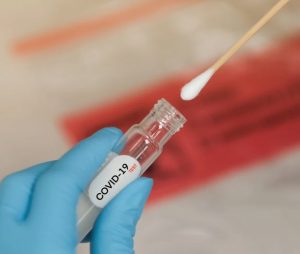 The COVID-19 case positivity rate is up 50 percent since mid-March.

SPRINGFIELD – COVID-19 hospitalizations and case positivity rates continued to trend upward Monday, leaving entry into a recently-announced “bridge” phase of reopening uncertain even as the percentage of seniors vaccinated continued to increase.

The COVID-19 case positivity rate was 3.3 percent Monday, March 29 having risen for the fourth straight day. It marked a 50 percent increase since March 14.

The Illinois Department of Public Health announced 1,761 new cases March 29 out of 49,449 test results reported over the previous 24 hours. Another five COVID-19 positive individuals were reported to have died Monday as well.

The 119 ventilators in use on average daily over the past week represented an increase of 15, or 14.7 percent, from the week prior.

All of the hospitalization metrics had been decreasing steadily for at least 15 weeks before beginning the uptrend over the previous two weeks.

Meanwhile, 68.9 percent of seniors have received at least one dose of the COVID-19 vaccine, but even if that number reaches 70 percent, a “bridge” phase to expanded capacity limits at restaurants, other businesses and social gatherings is on hold until the hospitalization metrics and number of new cases reported stop climbing.

Last week, the state authorized counties to expand vaccine eligibility to all Illinoisans age 16 and over ahead of the April 12 date on which the expansion is scheduled to go live statewide. Gov. J.B. Pritzker said allowing county-level expansions was an effort to get more people vaccinated in counties with low demand for those in the categories currently eligible for the vaccine.

Vaccination appointment and location information can be found at coronavirus.illinois.gov or by calling 833-621-1284.

Over the past seven days the state has administered 103,769 vaccine doses on average, and more than 5.5 million doses have been administered since the vaccination effort began. More than 2 million Illinoisans, or 16.3 percent of the state’s population, are fully vaccinated.

The number of vaccines distributed by the federal government is increasing, according to Pritzker, and the state announced four new mass vaccination sites Monday, including new sites in Kane, Lake and Will counties and the expansion of a site in Grundy County.

“Over 3.6 million Illinoisans have already received their first dose of vaccine. We’re projected to get nearly 1 million doses this week, and IDPH and our 97 local health departments working hard to administer these shots,” Pritzker said in a statement. “However, this battle is far from over, and with new cases and hospitalizations on the rise, I encourage every resident to buckle down, wear your mask, and do your part so we can all power through to the other side of the COVID-19 pandemic.”

Pritzker also announced Monday he was activating additional members of the Illinois National Guard to assist with vaccination efforts in McHenry County. There are more than 1,460 National Guard troops assigned to COVID-19 operations at 40 locations, according to the governor’s office.