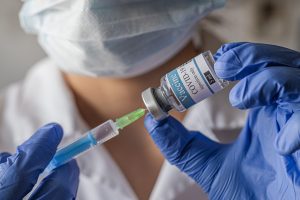 SPRINGFIELD — Areas of the state may begin vaccinating those 16 years of age or older earlier than anticipated as vaccine demand slows under current guidelines and COVID-19 hospitalizations and cases see an uptick.

Vaccine eligibility is not set to open statewide until April 12, but in response to an increase in cases, Gov. J.B. Pritzker announced that local health departments seeing low vaccine demand can expand eligibility to all who are 16 and older. The state also announced the deployment of five mobile teams to combat a surge in northwest Illinois.

The statewide seven-day rolling case positivity rate was 2.9 percent Friday, March 26, the highest rate since Feb. 15. As of March 25, 1,302 patients with COVID-19 were hospitalized, a high since Feb. 26. Of those, 264 patients were in intensive care unit beds and 120 were reported to be on ventilators.

Because some areas of the state have already administered first and second doses to a majority of those eligible under current guidelines, demand for the vaccine has slowed, the governor’s office said.

“We didn’t want doses sitting around,” Pritzker said at an unrelated news conference in Chicago Friday, March 26. “We’ve got teams that are going to regions of the state where this is happening and effectuating change so that we can bring down the numbers.”

The Chicago area is of significant concern as it has seen a daily case rate increase of nearly 50 percent since last week, along with six days of increases in test positivity, the Illinois Department of Public Health said in a news release. Suburban Cook County has also seen its daily case rate increase more than 40 percent with nine days of increasing hospital bed usage.

“This is very concerning to us and makes us pause to evaluate the numbers,” Pritzker said. “What we want to do most of all is make sure, is this a blip in the numbers, is this a short surge that will come back down, or is this something that could have some sustaining features to it.”

The state remains under Phase 4 restrictions, unable to move toward the “bridge” phase, which would allow for greater capacity limits for businesses and social gatherings, because of these early signs of a possible resurgence in COVID-19 cases.

The state is on track to reach 70 percent of first doses administered to residents 65 years or older in the coming days, which is one of the requirements that would trigger the bridge phase. However, increased COVID-19 hospitalizations are preventing the state from moving forward.

As of Friday, Pritzker said about 67 percent of those 65 years or older have received at least their first dose of vaccine.

Aside from vaccine administration numbers, hospitals must maintain 20 percent or greater intensive care unit bed availability, while hospital admissions for COVID-like illness and deaths must hold steady or decline over a 28-day monitoring period in order to trigger the bridge phase.

IDPH reported Illinois has seen 10 days of increases in the seven-day rolling average for hospital admissions. The COVID-19 case positivity rate has increased from 2.1 percent on March 13 to 2.9 percent Friday.

IDPH Director Dr. Ngozi Ezike said it is the state’s goal to get as many people vaccinated as quickly and safely as possible in hopes of slowing this increase.

“Recent increase in hospital admissions and test positivity are concerning new developments and we don’t want to go down the same path we’ve seen before and experience a resurgence in the pandemic, which is why Governor Pritzker directed us to use all our resources to halt these upticks,” Ezike said in a news release. “We cannot move forward if our metrics are going backward.”

Two weeks ago, Pritzker announced a “bridge” phase between the current COVID-19 capacity limits and Phase 5, in which all capacity limits are lifted. The bridge phase can begin when 70 percent of seniors are vaccinated, provided COVID-19 transmission and death trends do not reverse.

Per the bridge phase, the largest capacity increase is to social events, which can allow 250 people indoors and 500 outdoors. Previously, those were capped at 50 people. Ticketed recreation events are allowed to hold 60 percent of the facility’s capacity.

Restaurants and bars can increase capacity from 25 percent to 30 percent, and outdoor capacity is allowed up to 50 percent for standing areas. In seating areas, parties of up to 10 are allowed and different parties must be seated six feet apart.

Most other capacities at businesses would increase to 60 percent.

The state is expected to receive nearly 1 million doses of COVID-19 vaccine next week, which IDPH reported as being an all-time high for vaccine distribution in the state.

While vaccine supply increases, the slow in demand could result in vaccines going unused, which is another reason why the state is expanding eligibility earlier than anticipated, based on each county’s demand.

“Each county is different and local health departments know better how to vaccinate people in their communities as soon as and as equitably as possible,” Ezike said.

Communities will continue to receive baseline allocation of doses and an additional supply of vaccines will be allocated to high-demand areas where at-risk eligible residents face long waits for appointments, IDPH reported.

The state also announced it will be deploying rapid response vaccination teams over the next two weeks to five counties in Region 1 in an effort to quickly administer vaccine doses to combat increasing cases in these areas.

These teams will be administering the single-shot Johnson & Johnson vaccine from an additional allocation of vaccines outside of the local health department supply.