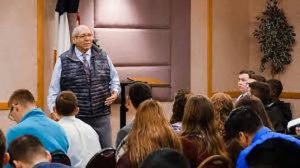 Northwest Bible Baptist Church got the attention of the Kane County Sheriff’s Department when it held regular services March 22 in violation of Gov. J.B. Pritzker’s shelter-in-place order. The Elgin area church has since agreed to go to livestream services. (Facebook photo)

A Kane County church has agreed to forego congregating for worship, but not without voicing some serious concerns over the measure.

Northwest Baptist Bible Church near Elgin had its regular worship services March 22, two days after Gov. J.B. Pritzker’s shelter-in-place order went into effect to try to halt the spread of the coronavirus.

Kane County Sheriff Ron Hain said his department received calls about cars in the lot of the church, located at 9N899 Nesler Road, and monitored the situation. He said deputies estimated a combined 40-70 cars at the church for its morning and evening services March 22, violating the governor’s mandate of keeping gatherings to less than 10 people.

“We determined they were in violation of the executive order,” Hain said.

The sheriff said Northwest Bible pastor Keith Gomez was unaware that the governor’s mandate required gatherings of no more than 10 people.

“We gained compliance through education,” Hain said of a March 24 meeting he had with Gomez.

Hain said Gomez wanted to see what exactly could be done under the governor’s order and, once he knew of the gathering limitations, wanted to see if the school could still have classes if it if put no more than 10 people in a room.

The sheriff said the church school had already gone to e-learning before his meeting with Gomez.

“They graciously tried to define how the governor’s executive order applies to our church services,” leaders wrote on the website. “Although they acknowledge that there are inconsistencies, we have been informed that they have no other option but to enforce the governor’s orders. Sadly, this is what martial law looks like. They assured us that they are only asking for a suspension of gatherings, not a shutdown of operations, and that services will resume as normal soon.”

Gomez did not respond to messages for comment as of press time.

However, in an interview with conservative radio talk show host Todd Starnes — which is posted on the Northwest Bible website — Gomez said the law enforcement leaders were even unclear as to the letter of the law during their meeting.

“If the law can’t tell us the law, how can we keep the law?” Gomez asked.

He said he has no issues with either Hain or McMahon, calling them both “good men.”

The pastor said with 56 rooms in the church building, 560 people could be on site without breaking the law, but that law enforcement leaders asked him not to do that.

“Why is there at the gun counter at Cabella’s here standing room only and the line running all the way out to the parking lot? Why is that different?” Gomez asked. “Why is that an essential need when this country if it ever had an essential need is for God’s people to get on their face and pray that God would stop all of this insanity that is going on?”

Gomez said church leaders did take precautions March 22 and had congregation members sit in every other pew to promote social distancing.

He said when he saw sheriff’s deputies taking pictures of his school staff’s license plates when they pulled into the church lot Monday morning he thought, “We are under martial law.”

Gomez said he is concerned because pandemics in the past, such as swine flu which affected 1.4 billion people worldwide and caused 18,000 deaths in America in 2009, did not cause the shutdowns of the economy, jobs and churches the way that the coronavirus has.

He said the laws regarding the coronavirus are changing by the moment and that it is difficult for anyone to keep track of the latest rules and regulations.

Gomez said in order to have remote church services, it will require more than 10 people to be in the Northwest Bible building “and we will do that.”

Gomez said there may be a political angle to the issue as well, noting that Democrats couldn’t take President Trump down with Russian collusion or the impeachment.

“They now have something where they can break his economy and maybe they have a chance of getting back in,” he said. “It sounds a little bit weird, but there’s a lot of stuff that’s unexplainable.”

Gomez said he is very concerned about what the future holds.

“If they can do this over this, what’s the next thing they’re going to do where they can shut us all down forever?” Gomez asked. “… It’s a strange time.”

Sheriff Hain said that during their meeting Gomez expressed his feelings that government was reaching into the freedom of religion “and was not happy about it.”

“He had some complaints and some suspicions,” Hain said of the Northwest Bible pastor.

The sheriff said he does not expect to have any issues with the Elgin area church during the remainder of the shelter in place.

“I hope they gained respect for us,” Hain said. “The last thing we want to do is take action against anybody.”

Hain said there have been no other issues with large gatherings in Kane County other than the Northwest Bible incident.

Northwest Bible leaders said on their website that services will be livestreamed from the church, but that all other church functions have been suspended indefinitely.

“We have been promised that if we work with them, there will be no further intimidation and the essential operation of the church and school staff will not be hindered,” leaders said in their website message.
“Please bear with us during these uncertain times,” they added. “While we still strongly disagree with the governor’s mandate, we will continue to meet the spiritual needs of our church, regardless of the circumstances.”

Large gatherings have not been a problem in area counties, according to local law enforcement agencies.

Gov. J.B. Pritzker’s shelter-in-place executive order requires that gatherings not be of more than 10 people.

Almost all local law enforcement agencies surveyed by Chronicle Media said they have not had any issues with large gatherings at churches, schools or businesses since the governor’s mandate.

“It is my belief that our area schools and churches are all taking advantage of the technology available and using Facebook and other similar systems to educate and continue to hold services,” said Capt. William Dimitroff, patrol commander with the Madison County Sheriff’s Office.

One incident that did arise was a church in Kane County held regular services March 22 after the shelter-in-place order was issued to halt the spread of the coronavirus. The church has since agreed to livestream its services.

A minor issue was noted in Woodford County where a 24-hour gym was still operating.

“A conversation with the owner is all it took for them to stop,” Dennis Tipsword, chief deputy of the Woodford County Sheriff’s Department, said. “Since it was 24-hour access with member key cards, the owner did not think to turn off the access.”