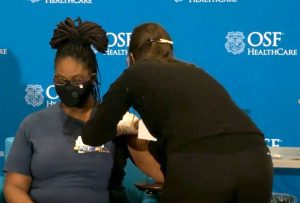 Chemica Jones, 41, a certified nursing assistant, receives one of the first COVID-19 vaccines administered in Illinois during an event Tuesday, Dec. 15 at OSF St. Francis Medical Center in Peoria. (blueroomstream.com)

SPRINGFIELD – Five health care workers at a hospital in Peoria became the first people in Illinois to receive a COVID-19 vaccine Tuesday, Dec. 15 marking what Illinois Department of Public Health Director Dr. Ngozi Ezike called “the beginning of the end” of the pandemic.

The vaccine, developed by the drug companies Pfizer and BioNTech, was granted Emergency Use Authorization by the U.S. Food and Drug Administration last week and is now being shipped throughout the United States. Early studies have shown that after two doses that are given 21 days apart, the vaccine is 95 percent effective in preventing the disease.

The FDA is also expected to approve a second vaccine from the drug company Moderna, possibly before the end of the week.

But Ezike said even as more vaccines become available, it will take several months to reach everyone in Illinois.

“I think most of 2021 will be spent in this effort,” Ezike said at the event at OSF St. Francis Medical Center in Peoria. “But I’m excited for the engagement and for the support of the community to get this done as rapidly as possible.”

Guidelines from the U.S. Centers for Disease Control and Prevention and the state’s own vaccination plan calls for health care workers and residents of long-term care facilities to be the first in line for the vaccine.

“People getting vaccinated, particularly our health care workers, is an exciting moment,” Gov. JB Pritzker said. “I hope that everybody will take note that you were part of this and witnessed this. These health care workers have been working all throughout this pandemic, taking care of people on the front lines. These are our heroes.”

In addition to the supply of vaccines going to the state, the federal government is also shipping vaccines directly to Cook, Lake, Madison and St. Clair counties.

Pritzker said he expects roughly 85,000 people in Illinois will receive their first dose of the vaccine this week. Those doses are being shipped to 96 hospitals in 50 counties that have had the highest death rates from the disease.

The release of the vaccine in Illinois came on a day when the state recorded another 117 virus-related deaths, bringing the total number of fatalities since the pandemic began to 14,509.

IDPH also reported 7,359 new confirmed or probable cases of the disease over the previous 24 hours out of 92,922 tests performed. That moved the state’s rolling seven-day average case positivity rate down one-tenth of a percentage point to 8.6 percent. That rate has now been below 9 percent for three of the past four days.

As of late Monday night, 4,965 people in Illinois were hospitalized with the disease, including 1,057 in intensive care units, 598 of whom were on ventilators.