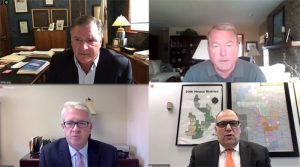 SPRINGFIELD – Republicans in the Illinois House and Senate pushed back Wednesday, Oct. 28 against Gov. J.B. Pritzker’s efforts to mitigate the spread of COVID-19, arguing that lawmakers should be involved in crafting the state’s response to the pandemic.

In back-to-back virtual news conferences, GOP leaders in the House and Senate argued that they believe there is scant evidence that bars and restaurants —which will be closed to indoor service in eight of the state’s 11 regions by the end of the week — are a significant source of COVID-19 spread.

“Many Illinoisans have invested their life savings into restaurants in their state,” said Senate Minority Leader Bill Brady, R-Bloomington. “This is a cornerstone to many of our communities. They barely survived the shutdown that was initiated by the governor earlier this year. But after that, they scraped together to take the proper health precautions to operate their restaurants in a safe manner, employing the people who worked so hard for them and providing a livelihood for those employees.”

The Republicans’ comments came on the same day the Illinois Department of Public Health announced it would impose enhanced mitigation measures effective Oct. 31 in northern suburban Lake and McHenry counties, which make up Region 9 of the state’s reopening plan. And it came one day after those same measures were announced for the city of Chicago, which makes up Region 11, effective Oct. 30.

That means that by Saturday, Oct. 31, eight of the state’s 11 regions will be under enhanced mitigation measures, which include the closure of bars and restaurants to indoor service, limits on the size of public gatherings and other measures.

Pritzker and IDPH Director Dr. Ngozi Ezike said last week that bars and restaurants are the second most frequently identified source of virus spread, based on data from contact tracers. The governor’s office distributed a graphic on Oct. 20 showing 2,300 of 17,939 contacted COVID-19 positive individuals said they had been at a bar or restaurant within 14 days prior to diagnosis. That was second only to “other,” which included social gatherings such as weddings, parties and more. The governor’s office said the report included data from 69 of 97 health departments.

They have also cited, among others, a study by the U.S. Centers for Disease Control and Prevention which showed COVID-19 positive individuals studied were “twice as likely to have reported dining at a restaurant” than those who tested negative.

But Republicans on Wednesday, Oct. 28 questioned those findings, saying the administration has not been forthcoming with the specific contact-tracing data they are using.

“There has been an absolute lack of transparency with regards to the governor’s office and Department of (Public) Health regarding the data that is being used to determine whether bars and restaurants are, in fact, significant contributors to the spread of the virus,” said Sen. Don DeWitte, R-St. Charles.

Republicans haven’t been the only ones questioning data about bars and restaurants. On Oct. 27, Chicago Mayor Lori Lightfoot, a Democrat, was interviewed on the PBS NewsHour where she said the mitigation plan there would effectively shut down one of the city’s major industries.

“Two-thirds of the people that are testing positive and are talking to our case investigators are telling us that they got it from somebody that they knew, and that they got it in a home or other social setting that’s not in public,” Lightfoot said.

During a separate news conference, House Minority leader Jim Durkin, R-Western Springs, presented data from DuPage County, which is part of Region 8, showing that most of the cases reported there were associated with long-term care facilities and skilled nursing facilities.

“And restaurants don’t show up,” Durkin said. “Contact tracing during the month of October did not show one case that appears on their list of confirmed cases that came from restaurants.”

Rep. Brad Stephens, R-Rosemont, in suburban Cook County, also questioned the accuracy of the data that state and local health officials are using.

“There is no exact data that shows that at a certain time, and on a certain day that that’s when I’m contracting the virus,” he said. “And if there is, we haven’t been shared that information. But how does somebody know that? What if I’m at five different restaurants over five different days, and I’m also at Target and the shopping mall and Walmart? People are free to move about.”

Speaking in Chicago during his daily press briefing Wednesday, Pritzker said the state will start sharing its data publicly in the coming days.

Brady called on Senate leaders to form a committee that could meet and review the data being used by IDPH and provide feedback to the agency. And when asked what kinds of mitigation measures he and other Republicans would support, he suggested reducing occupancy limits to 25 percent of capacity instead of closing restaurants to indoor service altogether.

He also said the state should put more focus on testing, contact tracing and isolation of people who test positive.

“We don’t think we’ve moved quick enough to do that,” Brady said. “And this is why we’re calling for evidence within the contact tracing that will tell us what we need to do based on science and based on the evidence in terms of mitigating. But so far, there’s no proof that restaurants are mass spreaders of this, and particularly if they were reduced to 25-percent occupancy.”