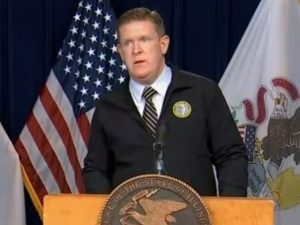 “Region 9 (which includes the two counties) is today seeing an 8.4 percent positivity average, up from 4.8 percent this time last month and up from 3.1 percent in late June,” Pritzker said Wednesday, Oct. 28 at his daily COVID-19 briefing in Chicago.  “Average COVID related hospital admissions today are five times as high as they were in mid-June, and three times as high as in mid-September. In other words, things are bad in Region 9 and getting worse.”

Beginning Saturday, Oct. 31, increased mitigation measures will include the closure of bars and restaurants to indoor service and limits on the size of social gatherings both indoor and outdoor to the lesser of 25 people or 25 percent of capacity, among other restrictions.

The virus has now claimed 9,619 lives among 389,095 confirmed cases. More than 7.4 million tests have been conducted since the pandemic began.

In the midst of a second major wave of COVID-19, Pritzker said the state is far more prepared than it was in March and April, as it now has stockpiles of personal protective equipment and far greater testing capacity.

“Are we better prepared? We sure are,” Pritzker said. “That doesn’t mean that we can stop the virus. It means that with the virus present among us, we at least can diagnose people, we can make sure that people have PPE and especially masks.”

Still, Pritzker called the ongoing increase in virus spread a “tremendous wave” that’s affecting the whole nation. He was joined by Illinois State Police Director Brendan Kelly, and both men noted that State Police would be enforcing COVID-19 mitigation measures in the regions subjected to them.

Kelly said ISP has received referrals and complaints and worked with local health departments, local law enforcement, and the Illinois Department of Public Health in 37 different counties. The department has issued misdemeanor citations in five counties so far.

The process for handling violations is laid out by emergency rules approved by a legislative committee, which requires voluntary compliance be sought before citations can be issued or licenses revoked.

According to Kelly, citations come when “you have some business owners, you got waitresses, waiters, cook staff, they’re just outright refusing to wear masks and, you know, right now that’s just kind of gross.”

Pritzker said enforcement is a local responsibility, but State Police will be called in when locals fall short.

He said the state uses the State Police when needed, and they have been “very, very effective” in areas where there are fewer sheriff’s deputies or police available for enforcement.

“And there are some areas where local leaders are not doing what they need to do, and that’s where state police would come in handy,” Pritzker said.

State Rep. Brad Stephens, a Republican who is also the mayor of the Chicago suburb of Rosemont, indicated local resources are not being used for enforcement in his village.

“I think at this point, our health department is not staffed to the level of going around and shutting all these businesses down,” he said in a virtual news conference with fellow House Republicans Wednesday morning. “I think this is an order from the governor and that’s something that the governor is going to have to enforce. You know, we’re gonna work with our folks as much as we can, to erect tents and do the kind of things that they suggest. But we’re hoping that the governor revisits this and that they’re allowed to open back up at some point really soon here.”

Stephens and other Republicans called for greater involvement of the General Assembly in setting mitigation measures going forward, but Pritzker has not indicated he is willing to deviate from the Restore Illinois plan that has triggered mitigations in eight of the state’s 11 regions.

Of the remaining three regions that have not triggered mitigations, Region 3, which includes Springfield and several surrounding counties, is one day away from triggering them as of Wednesday after two days above an 8 percent positivity rate. Region 6 in east-central Illinois saw its rate hit 8.1 percent, meaning if it holds that level for two days it would also see increased mitigations.

Region 2, including Peoria and several surrounding counties, increased to 7.7 percent.

Hospitalizations all once again hit second-wave highs, with 2,861 people reported hospitalized with COVID-19 as of Oct. 27, including 600 in intensive care unit beds and 243 on ventilators.

Pritzker on COVID-19 spikes: ‘We can’t ignore what is happening around us’