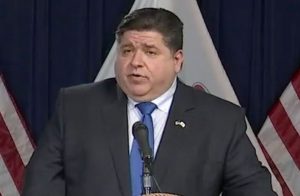 SPRINGFIELD – The COVID-19 death toll surpassed 14,000 on Friday, Dec. 11 as the Illinois Department of Public Health reported 190 additional deaths in people from their 20s to over 100 years of age.

Gov. J.B. Pritzker took questions on the state’s response to outbreaks at state-run veterans homes and about the impending approval of a COVID-19 vaccine manufactured by the drug company Pfizer.

He praised a U.S. Food and Drug Administration panel’s decision to recommend approval of the vaccine and said he expects quick official approval from the FDA.

“Historically, the FDA rules in the direction of these panels. And in this case with months of data indicating that this vaccine is safe, and thus far, 95 percent effective, the FDA’s decision is all but imminent,” he said. “Our own review panel is poised to review all available FDA data, and based on all information to date, the team is optimistic that this vaccine can safely move forward.”

The FDA’s Advisory Committee on Immunization Practices will then meet to offer advice as to how the vaccine should be distributed in future rounds within the population.

“Federal officials have told us that these first doses will be shipped out to states within 24 hours of approval and Illinois is prepared to quickly get this vaccine to our frontline health care workforce,” Pritzker said.

Still, Pritzker said, it will be months before the vaccine is available to the general population. Health care workers and long-term care residents will be prioritized to receive the initial doses, per the state’s vaccine plan.

“That means that an awful lot of people are still going to be needing to wear masks and socially distance and they’re going to need to follow the mitigations and treat it as if the vaccine doesn’t exist for them because it hasn’t been manufactured yet to supply it to them,” he said. “So that means we’re going to see continued infections and continued hospitalizations, ICUs, ventilators and ultimately deaths.”

The state also reported 9,420 new confirmed or probable cases, bringing the total since the pandemic began to 832,951 cases with 14,050 deaths among more than 11.5 million test results reported. There were 104,448 results reported Friday for a one-day positivity rate of 9.1 percent.

While on a downward trend, the rate still means there’s high community spread of the virus. Pritzker said when community spread is high, that means the virus has a better chance of making its way into long-term care facilities where populations are more vulnerable.

At the state-run LaSalle Veterans’ Home, 33 residents have died from complications attributed to COVID-19 since Nov. 1.

Pritzker was asked to compare the LaSalle outbreak to a yearslong Legionnaires’ Disease outbreak at the Illinois Veterans Home at Quincy, which occurred under former Gov. Bruce Rauner’s leadership and which Pritzker heavily criticized during the 2018 campaign. That outbreak killed 13 residents over a number of years.

“And is there more that could be could have been done? I don’t doubt that there is more that could have been done,” he said. “It is easy, in retrospect, to say that about really almost any situation. But I will also say that our intent here from the get-go, has been to take care of these veterans and make sure, not only do we learn what mistakes may have been made, but to rectify them.”

He said Legionnaires’ Disease, which is a severe pneumonia caused by inhalation of waterborne bacteria, is “extremely preventable,” while he said the coronavirus and the disease it causes is extremely rampant in the community.

Three legislative committees are investigating the administration’s response to the LaSalle outbreak, including why the facility appeared to have nonalcoholic hand sanitizer in place in wall dispensers and why some staff members were seen eating in the kitchen unmasked and not socially distant.

The LaSalle home’s administrator, Angela Mehlbrech, was fired earlier this week, and the head of nursing at the facility was put on administrative leave. The governor was asked for background on the personnel decisions Friday.

“It’s an accumulation of things during this entire matter,” he said. “But suffice to say that there are things that are just unacceptable, like hand sanitizer not being in the right place, or the right type being in the right place. That’s just one example. But certainly, you know, this is a personnel matter so I want to be careful about how we discuss it here. It’s a legal matter. But I wanted to make sure that the people who live in those facilities are as safe as possible. And so we put a terrific leader in Anthony Vaughn in charge of that facility.”

Vaughn, an Illinois Department of Veterans’ Affairs acting assistant director, is a 24-year veteran of the U.S. Marine Corps who joined IDVA upon his retirement from active duty in 2005.

Statewide, hospitalizations remained about level with 5,141 people hospitalized for the disease as of Thursday night, including 1,081 in intensive care unit beds. That left about 24.8 percent of total hospital beds available statewide and 18.7 percent of ICU beds.

IDPH Director Dr. Ngozi Ezike said she recommends Illinoisans stay home this holiday season, but those planning to travel should be tested for the virus before doing so.

“But please understand that having those tests does not really give you a free pass and assure that there could be no transmission of infection,” she said. “Someone who tests negative today could be exposed tomorrow on the plane or in the airport, and then spread the virus in the days after that.”