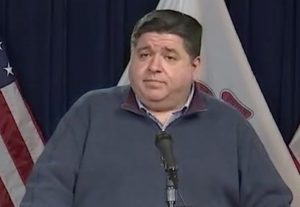 SPRINGFIELD — Gov. J.B. Pritzker said Thursday, Dec. 10 his administration has requested the help of the Illinois National Guard at three of four state-run veterans homes, including two homes that are dealing with COVID-19 outbreaks.

Pritzker said the National Guard members were sent to the LaSalle Veterans’ Home on Thursday, and will arrive on Monday at state-run homes in Quincy and Manteno to provide “staff support for screening and handling testing data tracking so that medical staff can focus on direct patient support.”

The LaSalle Veterans’ Home reported an additional death this week, bringing the death toll at the facility to 33 residents since a coronavirus outbreak was first reported at the home on Nov. 1.

“Since the current outbreak at the home, every employee is tested with rapid result antigen tests prior to every shift and residents are tested every day. In recent weeks this protocol has identified six asymptomatic staff as carriers. As a result of that identification, they were able to isolate,” Pritzker said at his daily news conference on Dec. 10.

He said an outbreak at the Quincy facility, which includes six separate residential buildings, has resulted in positive tests for 32 of 293 residents, along with 22 staff, “though it is currently primarily limited to one residential building within the home and staff do not work among multiple buildings.”

Illinois Department of Public Health staff and specialists with the U.S. Department of Veterans Affairs have visited the Quincy site in recent days, Pritzker said.

The veterans home in Manteno has reported three of 169 residents and four staff who are currently positive for COVID-19, according to Pritzker.

He said the Anna Veterans’ Home and the Prince Home, which is a separate facility on the Manteno campus, have not reported any positive cases among residents or staff in their most recent tests.

Earlier this week, Pritzker dismissed the question when he was asked by a reporter whether he has considered accepting help from the National Guard at the state-run veterans’ homes.

On Thursday, Pritzker apologized for being dismissive.

“In retrospect, I had directed every member of my administration to move quickly to respond with every available resource to assist (the Illinois Department of Veterans Affairs), and National Guard was asked to be of assistance before I was made aware,” he said.

The assistance from members of the National Guard comes days after the LaSalle home Administrator Angela Mehlbrech was fired from her position, and the facility’s director of nursing was placed on leave pending an investigation from the acting inspector general of the Illinois Department of Human Services.

Lawmakers in the Illinois General Assembly have also called for investigations into IDVA’s response to the LaSalle outbreak.

Last week, the House Judiciary-Civil committee announced it was opening an inquiry into the deaths and requested documents and information from the facility. The House Veterans’ Affairs Committee will hold a subject-matter hearing on the LaSalle outbreak next week, and the Senate Veterans Affairs Committee held one subject-matter hearing on the outbreak last month.

This week, the Senate Veterans Affairs Committee also requested a list of documents and information related to the LaSalle outbreak from IDVA.