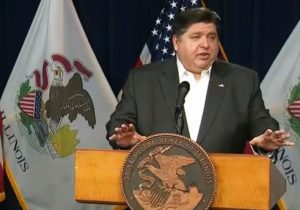 Gov. J.B. Pritzker announces that the state for the first time surpassed its daily coronavirus testing goal of 10,000 in the previous 24 hours during a news conference Friday, April 24 in Chicago. With more than 16,000 tests in the past day, there were 2,724 new confirmed cases of COVID-19, the highest single-day count thus far.   (Credit: blueroomstream.com)

SPRINGFIELD — Illinois surpassed a long-stated benchmark of 10,000 daily completed tests for COVID-19, state officials announced Friday, April 24 Gov. J.B. Pritzker called the testing of more than 16,000 people in the past day, “a very important milestone” in the state’s response to the pandemic.

The Illinois Department of Public Health reported Friday that 16,124 tests were completed in the past 24 hours, shattering the state’s previous daily high of more than 9,000.

“Vital to our efforts to reduce social restrictions, get our economy going and keep the residents of our state safe is the expansion of testing for COVID-19 infections,” Pritzker said during his daily briefing in Chicago.

The number of COVID-19 tests predictably brought with it a daily high of new confirmed cases, 2,724, bringing Illinois’ total to 39,658.

(Check cases by county on this map)

“Our ability to test and get results quickly is key to our ability to map the presence of this virus and to gradually reduce our mitigation measures and get more people back to work,” Pritzker said. “There’s still more work to do to maintain and build on this progress, but reaching and surpassing the 10,000 mark is a great first step.”

The governor added that the rate of positive results in the most recent day of tests was 17 percent, which is below the state’s cumulative positive rate of 21 percent.

The IDPH also announced that 108 people died from the virus in the past 24 hours, bringing that total to 1,795. That count is concurrent with state models that show Illinois is in its COVID-19 peak of between 50 and 150 deaths per day.

Pritzker said Illinois was able to achieve Friday’s testing milestone by expanding testing and gathering more testing materials, including new shipments of swabs that have allowed testing output to “more than double” in the past week.

Despite vastly increased testing, “The challenges in the supply chain in order to get us to 10,000 were immense,” Pritzker said.

“The supply chain remains a challenge, most significantly sourcing re-agents and testing swabs, and the costs that come with it,” Cummings said.

Pritzker said he expects to sustain 10,000 tests per day, but added that depends on available testing supplies and how many people each day request a test.

Pritzker also said the initial 10,000-test milestone was a goal set when Illinois struggled to complete even 5,000 tests per day, and that going forward, the state will need to administer “many more tests than 10,000.”

IDPH Director Dr. Ngozi Ezike said the health department is also pushing testing materials to “more and more” long-term care facilities, which include nursing homes and assisted living facilities, in order to get ahead of future outbreaks.

“Our hope is that by testing staff and residents in the long-term care facilities located in areas with high levels of community transmission, we can detect cases earlier and potentially before an outbreak occurs,” she said.

One type of testing the state has held off from is antibody testing, which attempts to detect someone’s immunity to COVID-19 via blood sample. Although some hospitals have begun administering these tests, Pritzker said verifying their accuracy “has been difficult.”

Because of the quality of current antibody tests and the fact that this coronavirus is new, Pritzker said, “researchers don’t yet know the extent to which having COVID-19 antibodies equals having immunity.”

“As soon as they prove themselves accurate and reliable, I will make it a priority to get them into our communities as widely as we can,” he said. “What I won’t do is run full speed ahead with these tests before they’re proven, because among other things, we would be offering people a false sense of security.”

Pritzker on Friday also clarified part of Illinois’ modified stay-at-home order, which goes into effect on May 1, that requires — instead of suggests — people wear face coverings when in a public place where they cannot maintain a six-foot distance from other people.

Pritzker said grocery stores should be allowed to turn away a person who is not wearing a face covering.

“It’s perfectly acceptable to tell people that you’re not allowed in if you’re not wearing a face mask,” the governor said. “Remember, a face covering is protecting other people. So this person is being not just disrespectful to everybody in the grocery store, but also potentially infecting other people.”

He suggested that before turning someone away, store owners politely ask customers to securely cover their face with a T-shirt or other piece of clothing.

“And if they don’t, they shouldn’t be allowed in,” he said.

If people are not able to buy masks online or at a store, Pritzker suggested creating ones at home out of cloth. The federal Centers for Disease Control and Prevention has a step-by-step guide on its website: https://www.cdc.gov/coronavirus/2019-ncov/prevent-getting-sick/diy-cloth-face-coverings.html.