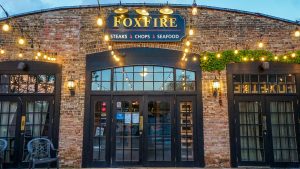 The FoxFire restaurant in Geneva will be allowed to have indoor dining at least temporarily after a Kane County judge ruled last week in its favor when the establishment challenged the legal authority of Gov. J.B. Pritzker to impose further COVID-19 mitigations on bars and restaurants. (Photo courtesy of FoxFire)

A Kane County judge’s ruling this week that temporarily allows indoor dining for one restaurant in the region is headed to a state appellate court.

On Monday, Oct. 26, Judge Kevin T. Busch allowed the restaurant owner’s request for a temporary restraining order that effectively bars Pritzker or the health departments from enforcing the new restrictions for FoxFire.

Lawyers for the governor appealed the decision to the 2nd District Appellate Court, which is one of five appeals courts directly below the Illinois Supreme Court.

Pritzker announced the new restrictions for the region last week after Region 8, which includes Kane and DuPage counties, saw a positivity rate of more than 8 percent for three consecutive days. The new restrictions ban indoor service at bars and restaurants, and limit capacity of gatherings to the lesser of 25 people or 25 percent of maximum occupancy.

Those restrictions took effect on Oct. 23.

They argued that state law only gives the governor emergency powers for 30 days.

Attorneys with the state Attorney General’s Office, which represents Pritzker, maintain that the governor’s COVID-19 executive orders are valid and enforceable.

In support of this argument, lawyers for the governor submitted a document with the court that lists 14 federal or state court decisions from judges denying similar requests for temporary restraining orders, based on the claim that Pritzker lacks authority under the law.

In an emailed statement, a spokesperson for the Attorney General’s Office wrote: 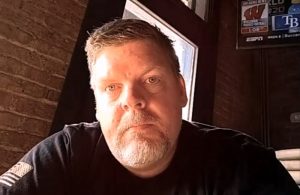 K.C. Gulbro, owner of FoxFire restaurant in Geneva, said in a virtual news conference Wednesday, Oct. 28 he believes his restaurant is safe enough to remain open despite the spread of COVID-19. On Oct. 26, a Kane County judge allowed the restaurant owner’s request for a temporary restraining order that effectively bars health departments from enforcing the new restrictions for FoxFire. (Credit: Blueroomstream.com)

“With 9,568 lives lost and half the counties in Illinois now at the Illinois Department of Public Health’s warning level, the need for these lifesaving measures could not be more evident.  As we have argued successfully in other Illinois courts that have considered these issues, the governor’s constitutional and statutory authority to protect Illinois residents during the pandemic is clear. We are committed to continuing to defend the well-reasoned measures being implemented to mitigate the spread of COVID-19 throughout Illinois, particularly as the numbers of positive cases and hospitalizations once again increase.”

“We take all the precautions and we follow the (U.S. Centers for Disease Control and Prevention) guidelines. We feel like restaurants and bars can do this on their own and should be open, and be on CDC guidelines,” Gulbro said.

“This isn’t good for anybody,” he added. “Outdoor seating in 30 degree weather is not healthy. We feel like the indoor dining is better safety for our customers and our patrons.”

Kevin Nelson, one of the attorneys representing FoxFire, did not respond to a request for comment.

In an interview with WGN radio on Monday, Nelson said the case hinges on the Illinois Department of Public Health Act.

“Really what it came down to is, there’s this thing called the Illinois (Department of) Public Health Act. And in there, every restaurant, every business is afforded due process. If you’re going to shut them down, you got to give them advance notice. And ultimately the decider of that is a local judge, and in this instance Judge Kevin Busch stepped up to the plate, so to speak, and said, this local judge looked at everything, and I’m not going to extend that order to this business,” Nelson said in the interview with WGN.

Nelson said FoxFire is the only restaurant in Kane and DuPage counties to be able to “lawfully” offer indoor dining.

But there is still a question of whether Busch’s ruling protects the restaurant from being subjected to a misdemeanor citation for violating the current COVID-19 mitigation restrictions.

Misdemeanor citations have only been issued in five counties for violating the COVID-19 restrictions, according to the Illinois State Police.

A spokesperson for ISP did not respond to a question about how Busch’s ruling would impact enforcement specifically at FoxFire.

During the daily press briefing Wednesday, ISP Director Brian Kelly reiterated that the misdemeanor citations are an “instrument of last resort” for law enforcement after first seeking voluntary compliance, then a verbal warning, and finally a written warning.

“Unfortunately, you have some business owners — you got waitresses, waiters, cooks, staff — they’re just outright refusing to wear masks and, right now that’s just kind of gross,” Kelly said. “And it’s definitely a way to spread this disease.”

The conflicting rulings over the governor’s powers to declare multiple 30-day disaster proclamations may eventually reach the Illinois Supreme Court.

The state’s highest court has not yet weighed in on that question, which has been raised in numerous state and federal lawsuits challenging Pritzker’s authority.

In May, the Supreme Court turned down a request to intervene in a similar case involving a lawsuit filed by downstate lawmaker Rep. Darren Bailey, R-Xenia.

Bailey’s case was consolidated with five other civil lawsuits that are asserting nearly identical claims about the governor’s emergency powers.

A hearing in those cases is set for next month.