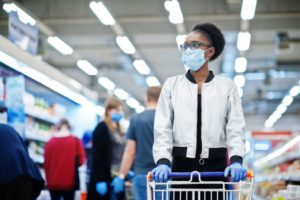 The new Tier 3 mitigations strictly limit capacity at retail stores and other Illinois businesses and require casinos and video gambling terminals to close, among other economic restrictions.

That brought the death toll since the pandemic began to 11,304 out of 634,395 confirmed or probable cases. The newly reported deaths occurred in people ranging from their 20s to older than 100.

“Today is the first formal day of our temporary Tier 3 mitigations,” Gov. J.B. Pritzker said during the Nov. 20 news conference in Chicago. “Remember, the core philosophy here is that if we all stay home as much as possible, if we all avoid the trips outside the house that we don’t need to take right now, we can fight this recent surge and turn things around for our health care workers and hospital systems who are facing an increasingly dangerous situation across the state. And we can potentially pull back on these mitigations for everyone before the December holidays.”

The new mitigations strictly limit capacity at retail stores and other Illinois businesses and require casinos and video gambling terminals to close, among other economic restrictions.

The mitigations took effect as the state reported 13,012 new confirmed or probable cases of COVID-19 among a single-day record 116,024 test results reported. That made for a one-day positivity rate of 11.2 percent, which drove the seven-day rolling average case positivity rate to 11.5 percent, a decrease of a half point from the day prior.

At Pritzker’s briefing, a Bloomington family shared the story of their daughter, Danielle Kater, who died from COVID-19 complications at 30 years of age.

Kater’s husband Tim said his wife of six years first lost her sense of smell on a Tuesday, her test came back positive for COVID-19 on Saturday, and by the weekend she was having minor difficulties breathing.

“But nothing that we were worried or concerned about, we just thought it was part of being sick and that we just needed to get through it,” he said.

But they purchased a pulse oximeter which, by Monday, revealed low blood oxygen levels, so they went to the hospital. There, she was put on a BiPAP machine to aid in breathing. It helped, and Danielle began texting family from the hospital, telling them of improvement in her oxygen levels, Tim said.

“And later that night her oxygen levels dropped. They put her on a ventilator, which then, it kept the oxygen from going down further, but it never came back up,” he said.

“So you can only understand the devastation that our family has had through this,” Danielle’s mother, Tina Rubin, said in a virtual appearance at the news conference. “We lost our only daughter. Tim lost the love of his life. But through this, we want something positive. No, these aren’t just numbers, they’re not just statistics. These are real people with real lives and real future that have been stolen by this virus.”

Moving forward, she said, “we want to take all this negative energy that we have right now and try to turn it into something positive.” She urged listeners to follow social distancing and quarantine guidance and stay home when possible.

Illinois Department of Public Health Director Dr. Ngozi Ezike noted it has been 10 months since the first COVID-19 case was identified in Illinois and the first known person-to-person transmission was logged in the state. Since that point, she said, health care professionals have worked around the clock to learn about the virus and share information with the public.

She said people came together to limit the spread of the virus in the first wave of April and May.

But now, Ezike said, amid a surging second wave, that support has faded.

“Just as real as the virus is, so is the COVID fatigue that is accompanying it,” she said. “And we’re all tired of this virus, and we’re tired of staying home, and we’re tired of denying ourselves our common pleasures. But instead of blaming the virus for these concessions that we’ve been asked to make, we’re looking to blame one another. And so I just want to urge people to be kind.”

Hospitalizations, meanwhile, increased in all three categories from the day prior as of Thursday, Nov. 19. The Illinois Department of Public Health reported 6,111 hospital beds in use by COVID-19 patients, marking the 26th straight day of increases. That included 1,196 COVID-19 patients in intensive care unit beds and 604 on ventilators.

Ezike noted on Nov. 20 that the department would be changing the way it reports available hospital beds. Instead of reporting the number of actual beds in existence, IDPH will report the number of beds that have an adequate number of medical professionals to staff them.

Positivity rates declined in 10 of 11 regions from the day prior as of Tuesday, Nov. 17, the most recent day regional level data were available. As of Friday, 101 of the state’s 102 counties were at a warning level for COVID-19 spread, with only Union County in southern Illinois not on the warning list.