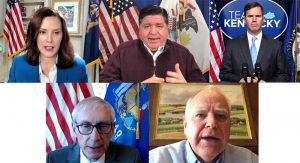 SPRINGFIELD – A bipartisan group of governors from seven Midwestern states, including Illinois Gov. J.B. Pritzker, issued a joint plea Tuesday, Nov. 17 for residents of their states to take precautions against the spread of COVID-19 over the upcoming holiday weekend, even if that means avoiding travel and family get-togethers.

“This Thanksgiving is going to look different than others have before, and it’s because it has to,” Michigan Gov. Gretchen Whitmer said during a virtual joint news conference. “I know that instead of hosting a big, in-person Thanksgiving like I usually do, I’m going to be setting up a Zoom call with my family members.”

Whitmer was joined by Pritzker, Kentucky Gov. Andy Beshear, Wisconsin Gov. Tony Evers and Minnesota Gov. Tim Walz, all Democrats, in the news conference. Earlier, however, those governors were joined by Republican Govs. Eric Holcomb of Indiana and Mike DeWine of Ohio in releasing a joint video on social media calling on residents throughout the region to take extra precautions this year.

All of those states, as well as others in the region, have seen some of the most rapid growth rates in the nation for COVID-19 infections and hospitalizations. And the news conference came on the same day Pritzker announced that, beginning Friday, Nov. 20 all of Illinois will be placed under Tier 3 mitigations, which include the closing of certain nonessential businesses and strict capacity limits in retail stores, fitness centers and some other establishments.

“As of our most current data, Illinois today is averaging more than 5,200 patients (per day) fighting COVID-19 in our hospitals — 400 more individuals than at our spring high,” Pritzker said. “And this isn’t just in Chicago or our other cities in Illinois. It’s happening in our suburbs and our rural areas.”

According to the Illinois Department of Public Health, as of Monday, Nov. 15, the most severe hospital resource shortage was in Region 7 of the state’s mitigation plan, made up of Will and Kankakee counties, where only 12 percent of the region’s hospital medical and surgical beds, and 16 percent of intensive care unit beds remained available.

But many of the governors said they were less concerned about the availability of hospital beds than about hospital staff.

“Because every day that you have 3,000, 4,000, 5,000 cases, those include our health care workers too,” Kentucky Gov. Beshear said. “And they’re not getting it at the hospital. They’re getting it in their communities. So, to make sure that we have enough people and enough staffing, we need people to do their part and to remember, if you don’t want to mask and you go out in public, you may be infecting that health care worker that you or your family could later need.”

Minnesota Gov. Walz said the health care workforce in his state is likewise affected by community spread of the virus outside of hospital settings.

“One of the things is child care, and schooling for these frontline workers, what they do with that,” he said. “When we start to see that community spread, it has a cascading effect. And what do they do with their own children? What happens when their school goes to distance learning? And that’s one of the challenges of looking at this much more holistically.”

All five governors said they plan to spend Thanksgiving at home with their own immediate families.