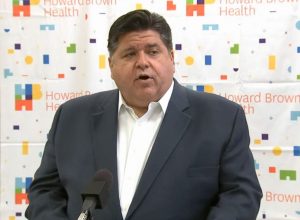 SPRINGFIELD – Federally Qualified Health Centers in Illinois and other health facilities that have been on the front lines in the state’s battle against COVID-19 are in line to receive $140 million in grants to help them maintain operations.

Gov. J.B. Pritzker made that announcement Friday, Sept. 25 during a news conference at one such clinic, the Howard Brown Health Center in Chicago.

“Our state is among the best in class when it comes to fighting COVID-19 because we’ve put people first, and our health care providers have had a key role in making that possible,” Pritzker said. “But for many providers, that work has come at a significant financial cost, from maintaining payroll to spending extra on personal protective equipment, to taking extra precautions in ambulance services for COVID-positive individuals.”

“In short, we’re giving direct dollars to our direct responders,” he added.

Federally Qualified Health Centers, or FQHCs, have accounted for a large part of the state’s COVID-19 testing program where tests are available free of charge, regardless of a person’s ability to pay or citizenship status.

In addition to FQHCs, Pritzker said grants will also go to safety-net hospitals and long-term care facilities. In addition, he said, the state plans to launch a web portal next week to allow smaller health care providers to apply for funding.

David Ernesto Munar, president and CEO of Howard Brown Health, said that health center saw a 70 percent drop in its in-person visits due to the stay-at-home order that was in place during the early months of the pandemic. And while he said that was necessary to control the spread of the disease, it cut deeply into the clinic’s regular revenue stream, although some of that loss was offset by a state rule that allowed them to bill for telehealth services.

Funding for the grants comes from aid the state has received through the federal Coronavirus Aid, Relief, and Economic Security, or CARES Act, which Congress passed in March.

Theresa Eagleson, director of the Illinois Department of Healthcare and Family Services, said the delay in disbursing the money was due largely to the need to comply with federal restrictions on how the money is used. She also noted that 60 percent of the money will be targeted in areas that have been disproportionately affected by the coronavirus pandemic.

The announcement of the grants came on a day when the Illinois Department of Public Health reported 2,514 new confirmed cases of COVID-19, along with an additional 25 confirmed virus-related deaths over the previous 24 hours. That brought the statewide totals to 283,885 cases and 8,563 deaths since the start of the pandemic.

As of Thursday, Sept. 24, 1,637 people in Illinois were reported hospitalized with COVID-19.  Of those, 371 patients were in intensive care units, and 124 of those patients with COVID-19 were on ventilators.

IDPH also reported Friday that 17 counties in Illinois are at the warning level for a resurgence of COVID-19 cases, down from 24 counties a week ago. A county enters the warning level when it crosses a threshold in two or more indicators of an increase in disease spread.