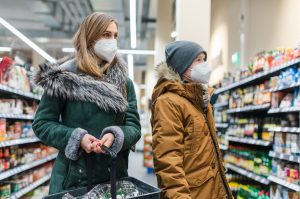 Family shopping in supermarket. Gov. J.B. Pritzker said Wednesday, Feb. 9 the COVID-19 case numbers for Illinois are trending in a positive direction, leading him to consider lifting mask mandates by the end of the month.

SPRINGFIELD – If hospitalizations for COVID-19 continue to decline for the rest of the month, Gov. J.B. Pritzker plans to lift his executive order that mandates face coverings indoors by Feb. 28. The plan does not apply to schools.

It’s unclear what level of rise in hospitalizations could lead the state to change its course, but Pritzker and health officials said at an afternoon news conference Wednesday, Feb 9 that such a scenario was not out of the question.

“It’s the end of the statewide mask mandate,” Pritzker said of the planned Feb. 28 lifting of the order. “But as we’ve all said, if things get very bad, I think we’ve seen this before with the onslaught of delta and then omicron (variants of the coronavirus), boy, masks really helped us to keep infection rates, transmission rates down. So, there may come a time in the future when that happens.”

Regardless of what happens with hospitalizations, masks will continue to be mandated at schools, on school busses and other public transportation, at nursing homes and congregate living facilities, and at day cares beyond March 1.

“The equation for schools just looks different right now than it does for the general population,” Pritzker said at the news conference in Chicago. “Schools need a little more time for community infection rates to drop, for our youngest learners to become vaccine eligible and for more parents to get their kids vaccinated.”

Masks, testing and vaccines have worked to keep schools open, Pritzker said, and that was the primary goal of the administration.

But whether he has the authority to issue such mandates in schools will be a question decided by state courts. The 4th District Court of Appeals is currently considering whether a lower court’s temporary restraining order on the governor’s school mandates pertaining to about 170 school districts will remain in effect. 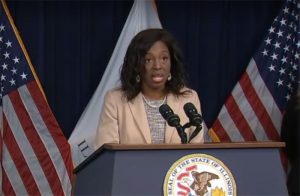 Illinois Department of Public Health Director Dr. Ngozi Ezike speaks at a news conference Wednesday, Feb. 9 in which she and Gov. J.B. Pritzker announced the state’s plan to lift the indoor mask mandate in some settings on Feb. 28. (Blueroomstream.com)

Without giving a timeline, Pritzker said “in the coming weeks” school mask mandates could be lifted if the state continues to see progress in terms of hospitalization and disease spread.

The reason the state was able to get to a place where Pritzker could consider lifting the mandate, he said, is because hospitalizations for COVID-19, which pushed heights of 7,400 cases in mid-January, have fallen by nearly two-thirds, to 2,496 cases as of Tuesday night. That marked a decrease of more than 140 from the day prior.

Twenty percent of statewide intensive care unit beds were available as of Tuesday night, up from a low of about 8 percent four weeks ago, Pritzker said.

It’s a faster decline in hospitalizations than at any point in the pandemic, Pritzker said.

Illinois Department of Public Health Director Dr. Ngozi Ezike said 89 percent of those hospitalizations are in unvaccinated individuals. Approximately 75 percent of the state’s population has received at least one dose of the vaccine, according the U.S. Centers for Disease Control and Prevention, putting Illinois at the top of Midwestern states.

Ezike said lifting the mandate does not signify an end to COVID-19, but the latest in the state’s effort to “coexist with COVID.”

“Your actions that you’ve already taken have helped to reduce the amount of virus circulating and it absolutely has saved lives,” she said. “But be clear that COVID is not gone and it won’t be gone on Feb. 28. So, we are going to continue to find ways to live with the virus.”

Local jurisdictions and businesses may continue to enforce stricter masking guidelines than outlined by the state.

Pritzker did not state specific metric thresholds would need to be met before school mask mandates could be lifted, but noted he hoped it would be “weeks rather than months” when a decision could be made. He deferred to Dr. Emily Landon, an infectious disease specialist at the University of Chicago, when asked about specific metrics.

Landon said “metrics are really tough” when it comes to COVID-19 tracking. The CDC recommends an analysis of COVID-19 cases and positivity rates, but new at-home tests could change that calculus. For schools, which can serve as a breeding ground for the virus as community hubs, case rates, hospitalizations and other metrics should be watched, she said.

Flexibility is needed, she said earlier in the news conference.

“Many have asked for a metric or a number that will guide the rules and regulations,” she said. “But each wave of this pandemic has had different characteristics, different behavior, and no single metric has been able to reliably predict the outcomes and the trajectory of each of the variants.”

Ultimately, Pritzker said, his decisions will come down to the advice of doctors, epidemiologists and the CDC.

“People really do feel that the trajectory here is one that we’re going to be able to hold onto,” he said.

The announcement didn’t sit well with Republicans in the General Assembly who have criticized Pritzker’s “top-down” approach to the pandemic. House Republican Leader Jim Durkin, R-Western Springs, criticized the governor in a statement.

“Gov. Pritzker’s failure to have a clear plan in place for schools to give parents and children hope of returning to a normal life is astounding,” Durkin said in the statement. “It is year three of this pandemic, and continuing to leave these families in the dark, with no data or metrics presented, is unconscionable and a clear sign the governor should not be trusted to get us out of this pandemic.”