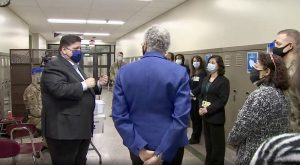 Gov. J.B. Pritzker and Cook County Board President Toni Preckwinkle (center) on Thursday, Jan. 28 visited the Morton East Adolescent Health Center in Cicero — one of seven sites the Illinois National Guard and the Cook County Health Department set up in Cook County to get the COVID-19 vaccine into the arms of Illinoisans. (illinois.gov)

SPRINGFIELD – Gov. J.B. Pritzker pushed back on criticisms of the state’s COVID-19 vaccine rollout Thursday, Jan. 28 saying state officials are “doing everything we can” to ensure timely delivery of doses.

Illinois currently ranks 47th among all 50 states in vaccine distribution, with 4.8 percent of the state’s 12.7 million residents having been vaccinated so far. The state has issued 829,488 total doses of the COVID-19 vaccine as of Thursday, with only 1.4 percent of the state’s population having received both required doses.

Some state lawmakers have criticized the Pritzker administration for the slow delivery of the vaccine, especially at long-term care facilities that have been prioritized under the state’s vaccine distribution plan.

The state reported Thursday that 131,284 doses have been issued at long-term care facilities out of 496,100 doses allocated, just 26 percent of the total allotted to them. Those vaccines are administered through a federal Pharmacy Partnership program with nationwide pharmacy chains Walgreens and CVS.

State senators from both parties asked for more transparency from the administration regarding the distribution of vaccines in a pair of letters to the governor’s office this week.

In a letter to the governor on Thursday, Jan. 28, Senate Republicans said, “Illinois has failed its residents.”

“We are asking for you to provide a clear explanation to legislators and to the citizens of Illinois as to why Illinois is among the worst states in regard to getting vaccines out to those who need it most,” the GOP Senators wrote in the letter. “With all due respect, blaming the previous President, the federal government and CVS/Walgreens simply will not suffice.”

Pritzker said Thursday that he had spoken to leaders from Walgreens and CVS pharmacies, and said the companies plan to have the first round of vaccinations at assisted living and long-term care facilities complete by Feb. 15.

“I’m pleased to see that things are improving in that regard,” Pritzker said in a Thursday news conference at J. Sterling Morton High School in Cicero. “The state is doing everything we can to help them along in that process.”

Pritzker said the state helped administer vaccinations at state veterans homes to ease the burden on Walgreens and CVS, and has placed the blame for the state’s lag in vaccinations on a slow delivery process from the federal government.

He said the federal government’s requirement to keep a set number of vaccines in reserve for second doses has also contributed to the lag.

“We wish we had enough vaccine for everybody right now,” Pritzker said. “But the federal government didn’t order enough vaccine in the first place under the prior administration, and the two companies that are producing it can only produce so much in the facilities they have.”

Pritzker said he is hopeful the single-day numbers will continue to increase as the federal government authorizes increased production and the state works to build out its vaccination facilities.

In total, nearly 1.8 million vaccines have been delivered to the state so far. The state moved into Phase 1B of its vaccination plan on Jan. 25, meaning an estimated 3.2 million additional residents are eligible to receive a vaccine, including people age 65 and older as well as non-healthcare frontline essential workers.

The state’s rolling COVID-19 positivity rate has continued on a steady decline over the past two weeks, standing at 4.4 percent Thursday. That marked the 20th consecutive day that figure has decreased, and the lowest it has been since Oct. 13.

The state has seen a total of 1.1 million cases of COVID-19 to date. Health officials reported 103 additional deaths Thursday, bringing the total number of deaths in the state to 19,067.

There was no movement in COVID-19 mitigations Thursday. Region 4 in the Metro East region near St. Louis was the only region to remain under stricter Tier 2 mitigations, which prohibits indoor service at bars and restaurants.

Regions 7 through 11, which include Chicago and surrounding suburban counties, remained under Tier 1 mitigations, which allow for some limited indoor dining and service.

The rest of the state has been returned to Phase 4 of the Restore Illinois plan with normal mitigation measures in place.