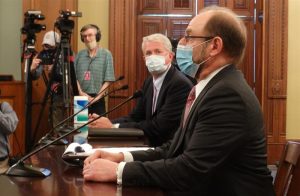 SPRINGFIELD – Republicans in the Illinois House on Thursday, Sept. 10 unveiled a single charge they hope to bring against Democratic House Speaker Michael Madigan, accusing him of “conduct unbecoming to a legislator or which constitutes a breach of public trust.”

House Minority Leader Jim Durkin, R-Western Springs, introduced that charge during the first day of hearings of a Special Investigative Committee that is looking into Madigan’s role in a bribery and extortion scheme involving utility giant Commonwealth Edison.

“As was stated earlier, this is a unique proceeding. It has only been invoked once and that was back in 2012,” Durkin said, referring to hearings that led to the expulsion of former Rep. Derrick Smith, who was then under federal indictment for accepting a $7,000 bribe from a confidential informant in exchange for legislative favors.

But unlike the Smith case, Madigan so far has not been charged with any crime and he has strenuously denied engaging in any wrongdoing, a fact that Democrats on the six-member panel pointed out repeatedly.

“This case is unique to previous special investigating committees, in that the member that is subject of the petition has not been accused by federal prosecutors of any criminal activity,” committee Chairman Emanuel “Chris” Welch, D-Hillside, said at the outset of the hearing.

Madigan was implicated in the scheme when officials at ComEd entered a deferred prosecution agreement in July with the U.S. Attorney’s Office of the Northern District in Chicago. In that agreement, the company admitted that over a period of years, it awarded lobbying jobs and contracts to close associates of Madigan in an effort to win his favor for legislation that benefited the company.

Although Madigan has not been charged with a crime, U.S. Attorney John Lausch has said there is an ongoing investigation into the matter and his office has issued a subpoena to Madigan’s office for documents and records of communication related to efforts to secure jobs at ComEd or its parent company Exelon for several named individuals.

But Ron Safer, an attorney and former federal prosecutors who is working with the House Republicans, said the deferred prosecution agreement contains evidence that is stronger than a criminal charge.

“The deferred prosecution agreement contains actual evidence, actual admissions by Commonwealth Edison, agreed to by the United States of America,” he said. “That is quite different and more substantial than a mere charge.”

Safer also noted that the committee’s job is not to determine whether Madigan committed a crime, but rather whether he engaged in conduct unbecoming to a legislator of which constitutes a breach of public trust.

Welch noted the same thing in his opening remarks.

“This is a political process, not a legal proceeding. We are not a court of law,” he said. “As such, this committee is not bound by traditional rules of evidence. However, we are bound to adhere to the rules of decorum.”

In addition to the formal charge, Republicans also said they are seeking “voluntary” witnesses to testify and produce documents. Those include Madigan himself and several people mentioned in the U.S. Attorney’s subpoena.

Among those are Michael McClain, a ComEd lobbyist who has been a close confident of Madigan, as well as Fidel Marquez, a former high-ranking ComEd official who was charged last week with conspiracy to commit bribery, and former ComEd CEO Anne Pramaggiore.

The committee adjourned without setting a date for its next meeting. Welch said that he and the ranking Republican member, Rep. Tom Demmer, of Dixon, first need to consult with the U.S. Attorney’s office in order to avoid interfering with the ongoing federal investigation.

“Before we take any substantive action, we must consult with the US Attorney for the Northern District,” Welch said. “This committee must avoid taking any action that can be an interference with an ongoing federal investigation or investigations.”

Durkin noted that was the same process used in the case of former Rep. Smith in 2012 as well as the impeachment proceedings against former Gov. Rod Blagojevich in 2009.