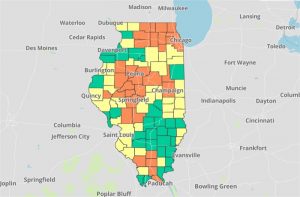 The Illinois Department of Public Health graphic shows the rate of community COVID-19 spread throughout Illinois. Green means low spread, yellow is medium and orange is high. Kankakee County, where the Manteno Veterans’ Home is located, is at a medium level. (Courtesy of IDPH)

SPRINGFIELD – At least 16 residents and six staff at the state-run veterans home in Manteno have tested positive for COVID-19 and one COVID-positive resident who was in hospice died June 15 according to the Illinois Department of Veterans’ Affairs.

The multiple positive results were uncovered Monday, June 13, according to an IDVA spokesperson, after the facility initiated broad testing in response to a positive case in the days prior. The spokesperson said protocols call for testing when a resident shows symptoms or when there is a positive test associated with a particular wing or unit.

All of the positive residents had received at least two doses of a COVID-19 vaccine and all but one of them were up to date on boosters, according to a news release from the department. Some of the residents are showing mild symptoms with most experiencing no symptoms, according to IDVA.

A staff physician was assessing the need for anti-viral post-exposure medicine Wednesday. A department spokesperson said the home has an ample supply of both IV and oral anti-viral medications on its grounds “and will immediately be able to provide the medications as directed by the medical director.”

The resident who died was nearly 80 years old, in hospice care and “completely asymptomatic,” according to the department. The resident had received his booster dose on June 7 and passed away a week later shortly after the positive test results.

The COVID-positive residents have been moved to a negative pressure isolation unit, and the Illinois Department of Public Health “only hours after the tests came back positive” to help mitigate spread.

A recent report from the state’s auditor general faulted IDPH for failing to respond swiftly to a November 2020 outbreak at the LaSalle Veterans’ Home which claimed 36 resident lives. The auditor found IDPH didn’t visit for 11 days after the first reported cases. Pritzker and IDPH officials last month, amid the audit’s release, noted U.S. Centers for Disease Control and Prevention guidelines discouraged on-site visits at the time due to the rapid spread of the virus.

Current CDC guidelines will still allow visitors at the Manteno home amid the outbreak, according to IDVA, which noted that “families have been notified that we are in outbreak status and that rescheduling visitation should be considered.”

“Our top priority is the health and safety of our military veterans and the heroic staff who care for them. We take this very seriously,” the department said in the news release. “We are following recommendations from local health officials, the U.S. Department of Veterans Affairs, and the IDPH to safeguard everyone at the facility.”

Residents are being encouraged to stay in their rooms and communal activities have been “curtailed,” with staff developing leisure activities in accordance with social distancing guidelines.

The Manteno home is one of five state-run veterans homes in Illinois and is located in Kankakee County. That area had a medium COVID-19 community level as of Wednesday, while 32 counties in the state had a high level.