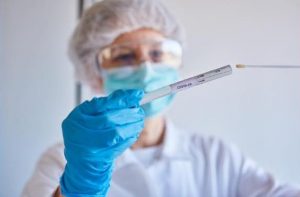 (Courtesy of the Illinois Department of Public Health)

SPRINGFIELD — The state’s COVID-19 hospitalizations and average case positivity rate remain below second-wave highs while public health officials in Illinois continue to caution residents that a post-holiday surge could materialize.

The Illinois Department of Public Health reported 5,059 new and probable cases of COVID-19 on Monday, Jan. 4 with an average of 5,900 of new cases daily from Dec. 31 to Sunday.

Those case figures are significantly lower than the second wave peak of 15,415 cases on Nov. 13 — which was the highest number of daily new cases reported since the pandemic began.

The latest numbers bring the statewide totals since the pandemic began to 984,880 confirmed and probable cases and 16,834 fatalities. Those fatalities included 477 individuals who died since Dec. 31.

Hospitalization rates continued to fall for the sixth straight week. From Dec. 28 through Jan. 3, the daily average hospitalization count from COVID-19 stood at 4,099, down 7 percent from the week before, and down 33 percent, or 2,029, from the period ending Nov. 23. At the end of Sunday, there were 3,948 people hospitalized with COVID-19 in Illinois, an increase of 131 from the day prior.

There were 816 intensive care beds in use by COVID-19 patients as of Sunday, an increase of 18 from the day prior. That left 25.9 percent of ICU beds open statewide, while the seven-day average for ICU bed usage stood at 833. That was a decrease of 9.9 percent, or 92, from the prior seven-day period. It’s the fifth consecutive week that the average decreased.

Illinois Department of Public Health Director Dr. Ngozi Ezike said in an interview with Good Morning America last week that state officials will be monitoring the data closely to see if there is a spike after Christmas and New Year celebrations.

“Thanksgiving was a much shorter holiday. We had the most tiny blip, almost insignificant. But with the Christmas and the New Year’s, with that break being days, weeks actually, there’s a lot of concern, especially as the fatigue is real,” Ezike said during the Dec. 29 interview.

“So, we will have to follow that closely. But we try to make sure that people know: No matter what choice you made, it’s still going to be very important when you come back. If you know you’ve been out and gathering, you’ve got to get tested, got to find out quickly in case there was spread of infection so that we can isolate and quarantine those that need to be.”